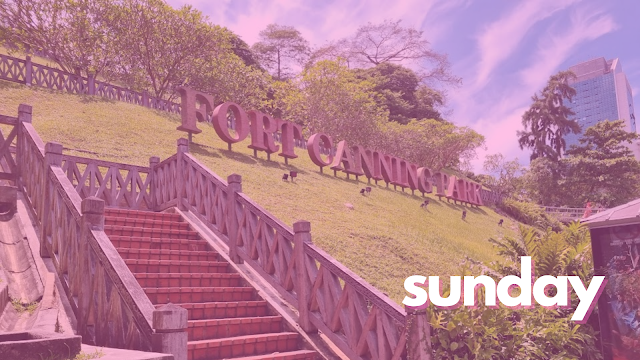 I honestly tried to take things easy today, but I also still managed to get some good activity in.

Tobie and I had stayed up a bit to finish the last two episodes of Start-Up, and I think it's fair to say that we were generally happy with the ending. It's not necessarily our favorite K-drama ever, but it was quite satisfying and had a lot of things to celebrate and enjoy.

That resulted in me not waking up early enough to go walking with my sister. Since she had a lunchtime appointment I ended up walking around the area on my own just to get some steps in and to get outside for a while. I had started with the notion that I'd just walk around the immediate area like what I do back in BGC. But I ended up going back to Fort Canning Park on foot and then back again. The alternative based on my walk was to end up at Orchard, which didn't make sense for my physical activity goals.

And then I spent time just reading together with my mom. We had our respective Kindles and would just occasionally make conversation. It was nice.

Our only plan for the day was to watch Everything Everywhere All at Once and that was quite an afternoon. I came for the science fiction - I stayed for another filmmaker capturing the struggles of the Asian family experience. A24 is really killing it when it comes to these loftier movies. Tobie and I really enjoyed The Green Knight, but I recognize it's hardly a mass-market sort of movie. Everything is still a lot more accessible, but it's still not the easiest movie to wrap your head around. I'm kinda guilty for watching it without Tobie, but it wasn't a family activity I'd back out of plus Tobie understands. He's also encouraging me to watch the What Did You Eat Yesterday? movie, which was on the plane when I flew into Singapore. Hopefully, it'll still be in the library during my flight back in a few weeks.

The rest of the day was spent with the nephews. The younger one makes the funniest noises as his way of making conversation and it's all fun while dodging his efforts to either grab my glasses or bite me. The older one randomly decided that I made a great chair for watching his animal videos and he stayed on my lap for quite a while - only getting up to choose a new video on his tablet to play on the TV. I'm glad we had a lot of quality time today.

This will have to carry me through the rest of the new work week ahead.