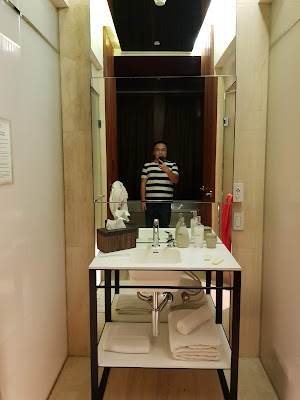 4-day weekends are a rare thing, especially when you follow Singapore holidays (in contrast with Philippine holidays) and I certainly started out wanting to make the most of things. And now the weekend is coming to a close and we certainly got a lot done but one still can't help feeling like that we still missed out on other stuff somehow. It probably didn't help that the weather was kind of all over the place.

Since Tobie still had work on Friday, I invested more of that day for my annual physical and other medical concerns. Then we wrapped up that night with an Exalted RPG session. Saturday was the surprise mom day, then we ended with a blast at O Bar as we all enjoyed Bench's birthday show. Sunday was a lot more chill and we started a new Wraith: The Oblivion RPG campaign.

We didn't have specific plans for today and ended up being really lazy. I at least checked on Mom, since she also has the day off. Then we had a nice lunch and finally got a replacement fan for the bedroom, so at least we were productive. We both had work that we needed to do so that meant a fair amount of computer time. We have a short week ahead of us as Friday we'll be flying out for our company outing.

We could have planned some big trip or even some sort of a staycation. But instead...we did a whole lot of other stuff, which was all a lot of fun but probably different from what most others would choose for a long weekend agenda. But no regrets - it's just how Tobie and I roll.

Still can't get my mind off The Expanse RPG. It's a crunchier system than I'd typically expect to play but I think I can work with it. It's more a question of finding players who want to work together for a science fiction adventure in the near future.