02A31: Online Board Game Comfort 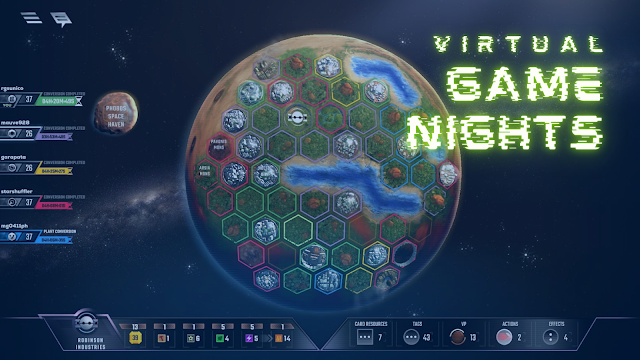 Metro Manila Community Quarantine - Day 547
Last night we had another FGTC online game night. While these virtual activities lack a lot of what made our monthly game nights super special, they're still better than nothing. And I really do value this particular group of friends enough to make sure we spend more online time with them - they're totally worth it.
We played a good mix of games yesterday across what was a 12+ hour session. The games included Lords of Waterdeep, two rounds of Istanbul, concurrent game of Castles of Burgundy and Carcassonne, a round of Azul to kill the time until the other game ended, and finally another marathon round of Terraforming Mars. Certainly a good mix of games, albeit slightly limited based on which games we all owned. As much as we enjoy the diversity of Tabletop Simulator, it's a rather heavy program both in terms of CPU resources and internet requirements. So it's still easier for the group to focus on more of the native game apps, even if it means some folks end up playing on their tablets or phones while others play via their laptops or desktop computers.
Online game nights are still pretty fun, especially since we keep a video call active the entire time. This helps us talk and banter during the games. Things are even nuttier when we have more than one game active at the same time as we end up hearing the chatter from the other game group. It's a comforting sort of noise that feels very similar to what our actual in-person game nights would sound like.
It's just as well that we didn't have a scheduled game today as we finished past sunrise. We slept in then got up for Tobie to get the groceries done, while I went through a more strenuous resistance bands workout as I continue to experiment with my new equipment. I've also had us re-watching the first season of The Expanse in preparation for the one-shot RPG session I'm scheduled to run this coming Saturday. Man, this show is still SO good, and going through the first season again is getting me even more excited for my game. Excitement certainly beats stressing out and worrying about the game not going well, so I'll take it.
Here's to hoping this week goes well for everyone.
gaming QuaranGeeking sietch life tabletop gaming television