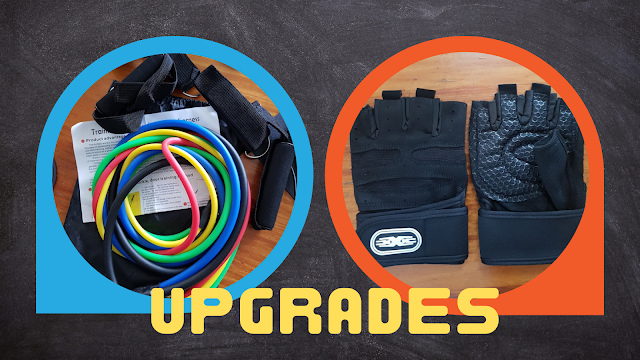 Metro Manila Community Quarantine - Day 546
Apart from my monthly keto resupply order, this month's 9.9 Lazada purchases included some new workout-related stuff to enhance my home exercise efforts. I've been following the Nike Training Club app practically since I signed up for Anytime Fitness last year, which has been pretty helpful throughout quarantine. But since I don't have access to full equipment, it also means I've largely been doing the same bodyweight exercises for most of this period and it has gotten a little repetitive.
The app generates workout plans for me, which is the main reason I went with this app versus others like Freeletics that charge for the plan generation feature. But since it's constrained by what equipment I declare is available, the app doesn't quite have a lot of freedom to throw more things my way. And more and more I've been overriding the app's choices for me by selecting what workouts I want to do, such as more yoga during the week or stacking both a circuit workout and some restorative yoga on the same day. So I had already been weighing no longer following the plan feature and just using it as a library of workouts - it's the main way I can get more of the exercise sets that include weight training, which is often coupled with a need for medicine balls and such - but I can get away with replacing some of the ball sets by using a dumbbell, maybe.
So I dusted off the old dumbbell set just to get more of that action, but I remembered why they had been fallen out of favor - using them can be a little rough on my hands, which makes me worry about more injury or at the very least more calluses. So that had me thinking of getting workout gloves as a potentially valuable purchase.
But I had also noticed a friend's social media update about using resistance bands as a mid-day workout, which sounded rather appealing to me. The Nike Training Club app doesn't necessarily include resistance bands among its workout options, but there's always YouTube and other online resources. And it felt like a nice addition to my workout options without buying overly large equipment that would take up space we clearly don't have.
So I found affordable options for both of these items and managed to get a decent shipping discount voucher as well. And it's somewhat ironic since my keto stuff, which I ordered promptly after midnight, hasn't even entered the fulfillment cycle. It's not super urgent that I get these items though - I re-order every month using the different Lazada sales just for cost-effectiveness.
The resistance bands arrived yesterday and I already got to try using them today. There are 5 bands in the set and I started with the second-lightest one, but mid-workout I found myself switching that out for the middle one just to add a greater challenge. I think I could go all the way to the fourth band since that one really makes me push myself, but I didn't want to bite off more than I could chew on my first try. That's the surest way to injury. But it definitely felt different and I'm going to try a different routine tomorrow. And the gloves are already here as well, so then I'll bring in my traditional dumbbell strength training in addition to the resistance stuff.
Still determined to come out of quarantine better than I entered it. I think I'm already there, but I still have a bit of a ways to go. And I've honestly come to enjoy the feeling of having worked out in the morning before diving into my tasks for the day and now I'm trying to experiment with new ways to push things further.
gym life health QuaranGeeking sietch life