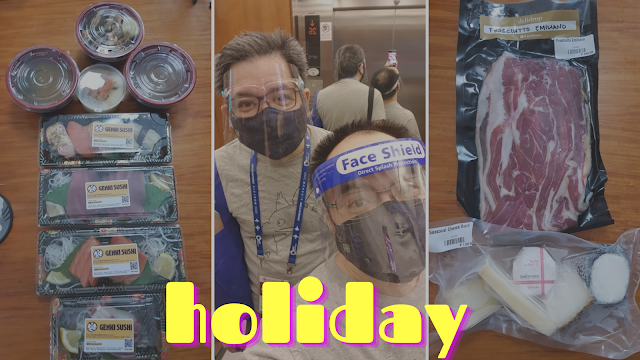 Metro Manila Community Quarantine - Day 534
After yesterday's awesome Detective: L.A. Crimes session, we stayed up late to watch the AnTuTan Says online drag show. This has been a regular Sunday night habit for us, but for this week we generally figured that this particular live stream would be a special one since we expected them to do something for my birthday. In pre-pandemic times, we'd receive similar treatment from our O Bar family, which would consist of particular performances dedicated to the birthday celebration. With entertainment spaces closed for over a year, we haven't really had much of an avenue for such celebrations. So it's nice when some of the queens try to do something, even if just online like this.
Normally we'd only be able to catch the first few hours of the show since we'd need to head to bed early before Monday morning. But with the local holiday and me filing leave for the day, we had the freedom to stay up all the way to the end of the show in the wee hours of the morning. And it was quite the delight since not only did they perform different songs they knew I'd appreciate, they also put together a quick video that included personal greetings.
I may not have had a big birthday celebration on the day itself, but this felt like a somewhat more proper celebration within the same weekend. And to add another layer of fun to things, we also played several rounds of Neuroshima Hex! while enjoying the show because why not?
Today we took things slow. We woke up late. And then we risked a quick trip out for errands and to help get me out of the house. It took me a bit of time to hype myself up to actually go out, but I don't overly regret having done so. We were barely out for an hour since we needed to get a new set of sheets and some kitchen things, but it actually felt rather nice to be back in a department store. Sure, we're rather efficient shoppers who don't exactly browse a lot or linger, but it was still nice to be out.
We brought home some Japanese for a late brunch and then augmented things with a cheese board and some prosciutto that Tobie had brought home yesterday and it made for a sort of extra special afternoon. And we also finally got started on Years and Years, which turns out to be more than your typical family drama series. Like WOW, we totally have to talk about the brilliance of this show at length at some point once we've finished the mini-series.
Dinner now. Baduy Pride after. Then maybe another game or two before bed.
birthdays gaming holidays QuaranGeeking queer life sietch life tabletop gaming Tobie