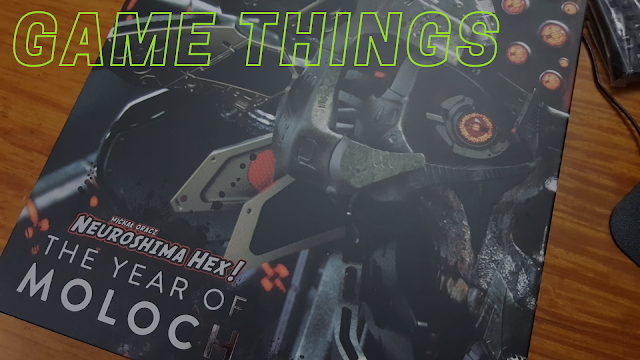 I mentioned that our copy of Neuroshima Hex! The Year of Moloch edition arrived yesterday. It's an implementation of the Neuroshima Hex! 3.0 game with a special Moloch box and containers for the 19 expansions released at the time. I say at the time since there's already a pre-order for a new expansion, Beasts, which won't have a special home in this box.

I'll be the first to admit that I'm not the best Neuroshima Hex! player just yet. It's a very tricky game of tactical strategy perhaps more akin to chess and all my efforts to beat the AI of the mobile app version have been pretty pathetic. But our love for Portal Games as a company combined with the unique benefit of having a box that stores all those factions in a nice way totally made sense. Plus Moloch being essentially a faction of killer robots naturally appeals to my geek sensibilities.

But after I slotted in all the expansions that I had gotten as part of a bundle offer, it turns out that  I still had an empty slot leftover - this being for a mini-expansion faction that was released with Polish editions of the game. So I guess I inadvertently found something to buy myself for my birthday - that darn mini-expansion. But given the price for shipping just about anything from their European store costs an arm and a leg, I loaded up my shopping cart with more mini-expansions for this game to make it more worth the effort.

My completist nature combined with my collecting hobbies will be the death of me, I know. And it's a luxury in itself to even have the capability to just dive into a game this fully. But we all deserve little indulgences despite the ongoing pandemic shit.

But I'm still very much excited about having a nearly complete set of this game now plus the unique Moloch packaging. It's still a very solid game and I know Tobie and I will find the time to play it eventually wrap our heads around the unique strategy of the game. and it looks super pretty in the collection, so that's good, too.

In other news, I still didn't work out today. Pain in my back was still pretty significant in the morning, so it felt prudent to continue to rest. But admittedly it's feeling a lot better tonight, so I may finally be coming around. I'm honestly excited about the prospects of working out again, but I also know it's too soon to rush back into things. I'll probably rest again tomorrow then maybe ease back into things on Friday.