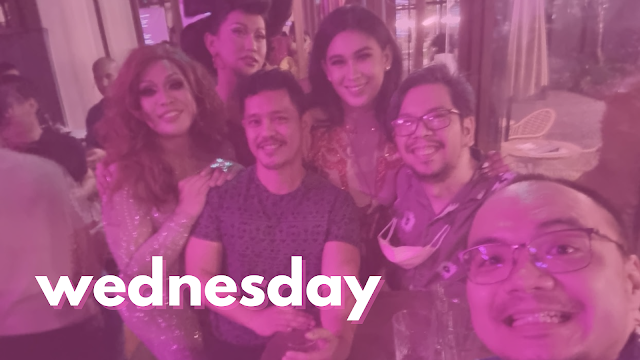 Well, Drag Race Philippines is officially here and we got a double-episode premiere. And in a rare event, we opted to catch the premiere at a watch party within BGC to support the drag queens who were going to perform in-between the episode screenings.

For the event itself, it was the first time this particular establishment was hosting such an event, so it wasn't without its share of hiccups. It was definitely not within our O Bar established comfort zone, but we figured it was more for the shared experience and less about being able to watch the drag performances (or the actual episodes) all that well. We planned to re-watch the episodes on WOW Presents Plus anyway to help drive more views for the show. Plus trying to watch the show past the official (?) photographer standing in front of the screen in order to take reaction shots of everyone kind of makes a re-watch required.

And maybe we don't like the kind of people who hang out at queer spaces within BGC? Just a thought hahaha

It's going to be a bit of a long road for this season and my heart still goes out to all the brave drag queens that decided to compete in the very first season of the show. The reality TV experience is a tricky one and it can make or break people. So we'll continue to send all the love and support to our drag artist friends who went through that pressure cooker.

The show is very local, and I don't mean this in a bad way. There's clearly an effort to make the show distinctly Filipino, which may or may not be received well by the global Drag Race franchise audience. But then again, we haven't quite seen a lot of international response to the Drag Race Philippines pre-release material on YouTube just yet, so I'm not sure what kind of a "splash" the show is going to make. So I guess every Filipino now has a duty to support the show online to get more eyeballs on it.

To be fair, it's a really interesting cast and I can see how any of them could win. We're naturally going to root more for the girls that we know thanks to O Bar (we're only human), but on the whole, we're curious to see how things are going to pan out.

Ladies and gentlemen, the race has officially begun.