02B44: Happy Friday Night Out and Saturday Fun 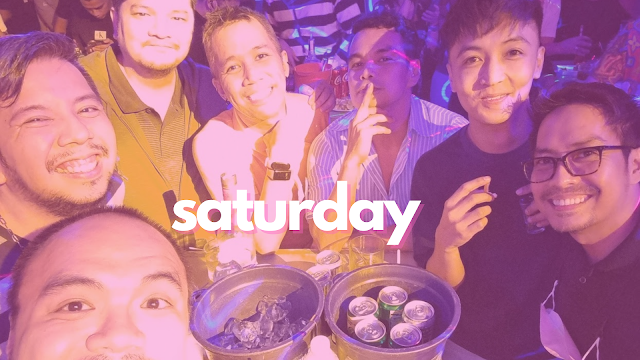 Reminder: My default on-image text for my blog headers is the day I post the photo, not the day of the photo being used. I only bring this up since it's kind of funny to label a Friday night photo with Saturday. Then again, this particular photo was taken after midnight, so it's technically a Saturday photo.

Last night was great. We had only reserved a small table but ended up being surrounded by friends. The crowd was fairly big but not as bad as last week and certainly not as crazy as a Saturday night, for which I was grateful. We only had a small table but it was just enough for our small group and it ended up being a regular destination for other friends "visiting" from other tables. And that number included some friends that we hadn't seen since before the pandemic started. So yeah, it has been a while, to say the least.

And the cherry on top was the theme for the drag show for the night. For some reason the O Divas decided to end the show with some fun songs from the 90s - thus music that most of us at the table were very familiar with. We were singing along and dancing to the music without abandon and it was just the perfect thing to make the night even more fun. By the time we went home, I was a little tired from all the dancing, a little hoarse from all the singing, but not too drunk, so that worked out well.

We slept in today and that was pretty blissful. I deferred working out as we needed to have brunch already since we were having a guest over (like in person!) for a one-shot RPG session. We played our very first Avatar Legends game, since I had backed the Kickstarter and had early access to the PDF version of the core book. And wowsers, it was a lot of fun! It definitely feels more like a longer-term game than quick one-shot material, which is how a lot of the Powered by the Apocalypse game sometimes feels like to me. Hopefully, we can figure out a campaign for this with the right group in the future.

Man, that reminds me that I need to invest time in preparing for a campaign using The Expanse RPG.

Tobie's running another TRPG online right now as I draft this post. I wanted to cover other things so didn't join the game. Now I want to try a yoga flow that promises to be something that's good before bed, and then I'll play some Star Trek Online. Whee.