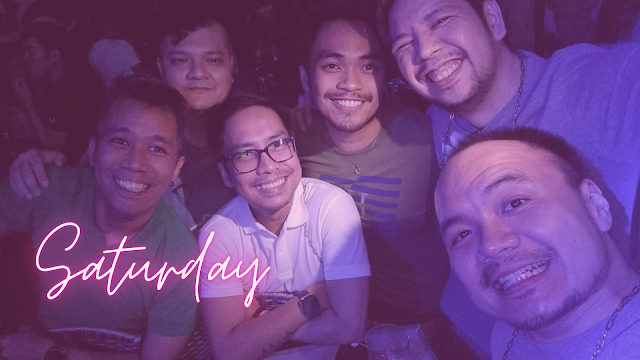 Metro Manila Community Quarantine - Day 749
In the pre-pandemic period, we would more likely go to O Bar on a Friday night versus Saturdays or Sundays since Saturdays get super busy and Sundays make Mondays more difficult than necessary. When the bar re-opened once Metro Manila was under lower alert levels, the capacity limits meant that every night had the same limits for people. And that made Saturdays feel more reasonable as O Bar options and we got a little spoiled over the last few months.
But with restrictions being way more relaxed now, Saturdays have pretty much gone back to normal, and that can be pretty stressful. I think our last event Saturday really pushed the limits of our patience, so much so we didn't go out the following weekend just to take a break. But the idea came up to revisit Fridays as an O Bar option and we finally went again last night.
We're still mainly working with the table limits sets when the bar re-opened even though it is once again possible for people to "walk-in" as guests without a table. And that means we can only really "bring" 4 other friends to join our table since Tobie and I take 2 of the 6 slots of the larger table. We have a core group of friends who make our internal priority list and that covers most of the other slots. And that's the sort of arrangement that came together last night plus one other friend who hadn't been back at O Bar since before the pandemic.
And we came on a night when O Bar was also experimenting with new elements to the show. This included a live singing set featuring some talented singers, although it did give the bar a bit of a beerhouse vibe. I don't mean this in a bad way but there's probably room to tweak things further to get the right atmosphere all throughout. But we had a lot of fun with it and ended up spending a lot of time with the singers later on after their set since they were right next to our table.
The show was great, as always. As much as Saturday nights tend to involve the really big production numbers, Friday nights nicely curate a lot of good numbers and bring them all together. And the crowd wasn't too crazy, so I didn't have that difficult of a time taking videos of the performances, which is always welcome. And there's this one number that was totally hilarious and I'm super happy that I got it on video.
All in all, I think we'll try to prioritize Friday nights in the future save for the big events that only happen on Saturdays. It may be a bit more of a challenge to schedule certain friends who still have work on Friday night, so we'll have to play it by ear on that front, I suppose. But it was definitely a fun, fun night and just what we needed after all the stresses of what felt like a particularly long workweek.
O Bar QuaranGeeking queer life