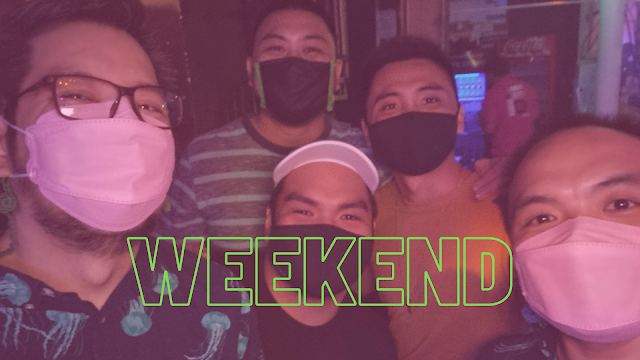 Metro Manila Community Quarantine - Day 715
Last night at O Bar was so much fun! As always, that has a lot to do with the people who were there as well.
The road to this particular O Bar night was a somewhat bumpy one since we had a bit of a challenge assembling our O Bar table group for the night. A lot of the people we had reached out to initially weren't available and we sort of had to work our way through our list of friends to come up with a final group.
But what added to that were a few other friends who had also made plans of going to O Bar and had let us know in case we'd be going. And this includes some friends who still hadn't been back to O Bar since before the pandemic. With the limited number of guests that the bar can accommodate with the ongoing health protocols and the resulting higher costs for a night at O, there are still a lot of people who haven't been back since the bar started to re-open in December.
The show was great on different levels. On the surface, the collection of performances was executed well and showed off the range of the O Divas. For longer-term O Bar patrons, there were some subtle shifts as familiar songs and numbers were performed by different queens all tied together with a set that featured recurring artists but not just one single pop artist, as what tends to happen for typical event nights. And how those different numbers came together just made me smile a lot. And I think it's safe to say that everyone in our circle enjoyed the show, which is the goal, really.
Then there was that spontaneous moment when people started to chant "Leni!" while Rihanna's "We Found Love" was playing. It was a crazy powerful moment that gives one a little hope for this campaign season, but of course, this is still a pretty narrow slice of the population. But yeah, certainly got me smiling at least.
We're trying to balance how often we go to O Bar with our other geeky plans like tabletop RPG sessions (albeit online ones) and other board game-related activities. Plus our bodies totally can't handle back-to-back O Bar nights anymore and we end up with zombie-ish weekends where we feel totally drained because we had been drinking at O Bar the night/s before. And I think our decent balance is going every 2-or-so weeks, assuming we can assemble tables for such nights.
Let's see how this will actually resolve over time. Hello Alert Level 1!
O Bar queer life stop the presses