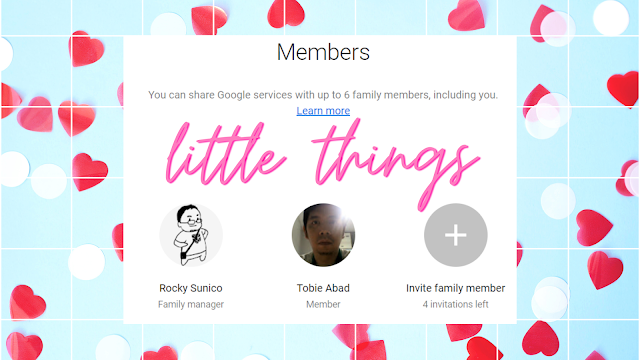 Metro Manila Community Quarantine - Day 613
The 17th of November is our anniversary and today marks our 12th year together. And man, it's hard to figure out what you can do to mark such a day when you're together almost 24/7 given our general adherence to the community quarantine. We're not comfortable with impromptu efforts to go out for dinner and such just yet. And it becomes very obvious when one of us decides to step out for any sort of errand since we rarely step out, period.
And while I accepted that it wasn't practical to try to do something ostentatiously big for Tobie to mark this special day, an idea came to me that worked out pretty well.
Tobie has a limited tolerance for digital stuff, at least when it comes to things like social media and newer platforms. This means random things like how he doesn't have an Instagram and the fact that he has never even tried out Spotify despite the fact that he has a greater appreciation for music than I do. Thus he either listens to downloaded music he has acquired or he plays music videos on YouTube. In fact, this is part of his daily routine where he has a playlist of music videos he plays on YouTube via his iPad while he showers and generally gets ready for the day. It's a decent solution, but it still means that he gets bothered by ads randomly and he has to leave the YouTube app open to hear his music.
So that got me thinking about YouTube Premium - particularly how it comes with YouTube Music. Tobie had at least tried out Google Play Music when it was still available, so I felt like Tobie would be able to cross over to a related platform. Sure, I had a Spotify Premium account and I could have extended that membership to him somehow, but I wasn't confident that I'd get him to finally sign up for the app. Thus the real question was how to turn this YouTube plan into a gift.
I couldn't find a way to gift him a plan, so the next best thing was to just sign up for and then extend the membership to him as a family member. We do something similar for things like our Netflix account and even how I push books for him to read to my older Kindle that he has inherited. Plus I get a bit of a kick out of anything that declares that Tobie and I are a family, even if just on the level of some digital platform.
So at precisely midnight (which was right after we had finished watching the holiday rom-com Love Hard on Netflix), I signed up for the YouTube Premium family plan, quickly sent him an invite to our new "family group", and told him to check his email. I was worried that it was going to be one of those gifts that I'd have to explain (and our family has a history of things moments like this when we get "too clever" in our gifting), but in the end, it went well, and I still got to do something to kick off our anniversary for the day.
And it was a good thing too since work was crazy busy and I didn't have time for anything else today.
From a practical standpoint, I've made updates to shift everything over to YouTube to embrace the platform more. I've canceled my Spotify Premium subscription and then spent 2 hours duplicating my O Bar Feels playlist on Youtube Music because it's my primary workout soundtrack. I reconfigured our Google Assistant prompts for our Google Home units so that they would trigger our respective YouTube Music instances whenever we make music requests. And I made sure Tobie also installed the separate YouTube Music app so that he can get in on the streaming music game in earnest and not just play music videos on YouTube.
Mission accomplished.
Google queer life sietch life technology Tobie