02A61: Today's Distractions and Entertainments 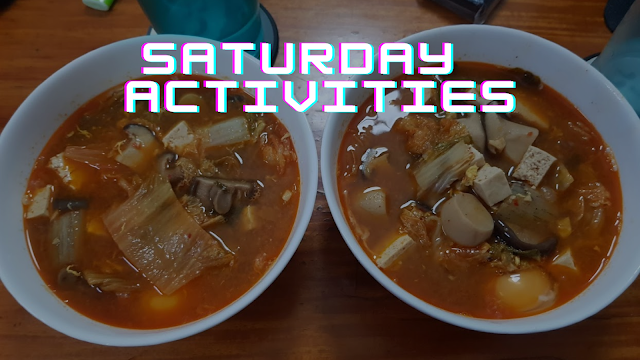 Metro Manila Community Quarantine - Day 595
After I finished writing last night's blog, Tobie and I managed to make time to play a few games. First up was The River, which is a relatively lighter worker placement game that plays pretty decently for its level of complexity. We've only ever played it once before, so there's still room to experiment with strategy and such. Tobie won again, but this time by a margin of two points. The other game we got to play was Paleo, also one of the newer games in our collection. It's a rather tricky cooperative game, but I was pretty surprised that we were able to defeat the scenario on the first try and within a single "day". The first time we failed to get past the first mission and it took us a few game days before we managed to get through things the second time around.
This morning Tobie ran another TAG bites one-shot session while I went through my weekend workout. I really wasn't feeling quite up to a more strenuous workout at first, but I was determined to still make the most of the fact that I have a lot more time to exercise on Saturdays more than any other day in the week. So in the end I still went through the 38-minute dumbbell routine I follow on Saturdays followed by the nice 35-minute restorative yoga flow. It wasn't my best level of performance and I was definitely struggling during the latter sets. But at least I still go through it and that's an accomplishment in itself.
The main challenge is that my legs are still rather sore from my emergency stairwell adventure the other day and there was a general weariness I was feeling as well. Actually exercising sort of helped, but I did feel pretty drained at the end. And I'm still working mainly with 5kg dumbbells, which is still considerable. I want to work my way up to heavier weights, but I also know that I shouldn't overly rush things. Slowly but surely and all that.
Today was our bi-weekly Night's Black Agents game, and most of the group focused on bringing an errant member back into the fold. But I'm rather worried for our other player character who was totally isolated this session and is on a rather dark path. It's one of those fun gaming conundrums where as players we all know the risks he's taking but our character-selves have no idea. How things will come together is what makes for great shared storytelling.
Not the most exciting Halloween weekend, I know. But it's what we have to work with.
gaming gym life health QuaranGeeking sietch life tabletop gaming Tobie