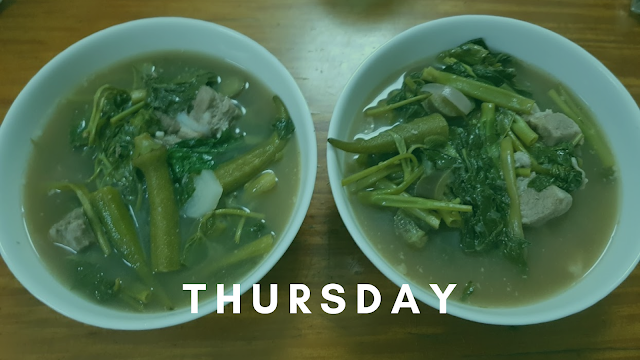 Metro Manila Community Quarantine - Day 593
I woke up with my legs still pretty sore from yesterday. I didn't get to document the fact that our condo's elevators went down yesterday just when I needed to go down to receive office-related documents from a Grab delivery driver. And this wasn't one or two of the elevators being down but ALL of them being down. So the only option given to tenants was to use the emergency stairs to move about the building - something that wasn't very fun given we live on the 27th floor. Going down 27 flights of stairs wasn't too bad - it still felt kind of fun. But going up 27 flights of stairs was quite the workout and initially, my thighs were burning. But the main was mostly in my calves when I woke up, so there's that.
This tempered the intensity of my workout today to one of the lighter resistance band workouts that I follow. I mainly juggle 5 or so videos on a rotating basis, but I should probably look for others or possibly develop my own routine. I do like the comfort of following workouts other people have put together but may just explain the exercises that go into the set and not necessarily go through the whole set "with" you. And I guess nearly two years of following the Nike Training Club app has rather conditioned me to embrace following workout videos.
We'll see what my body feels up to doing tomorrow. At least the elevator problem got fixed before I had to go down again, so I did not have a repeat of my impromptu vertical marathon.
The workweek is almost over. The month is almost over. The year is almost over. It's hard to really figure out what there is to look forward to. The national COVID-19 case numbers seem to be going down at least, so that's something to celebrate. The government is going to continue to relax rules because of this shift and maybe we'll see a relative return to normalcy soon, apart from the continued need for face masks the awkwardness of social distancing.
Movie theaters are going to re-open for real starting 10 November and this news moderately excites me. It has been confirmed that Ayala Cinemas will re-open on that date but no word yet from SM. These are the two closest cinemas in our area and our most likely choices for where to go - just a question of which movies we'll seriously consider the risks just to see them on the big screen. There will be all sorts of additional regulations like the need for face masks and face shields at all times along with banning eating in the cinema, so that will help to some degree. I think the bigger challenge will be enforcing those rules since things like eating during a movie is practically a cultural practice and it is rather difficult to endure face shields for lengthy periods of time - especially when you're trying to watch something despite the plastic obstruction in front of you the whole time.
Yesterday's wake really did make me miss the company of friends. If the current case trend continues, maybe we can consider some sort of a limited meet-up with one friend at a time or something. The prospects of this remain rather terrifying because every interaction risks infection. But I don't think we're going to survive to the end of the year without seeing anyone ever at all outside of limited family meet-ups. Our hearts can only take so much.
gym life health QuaranGeeking sietch life social networking stop the presses