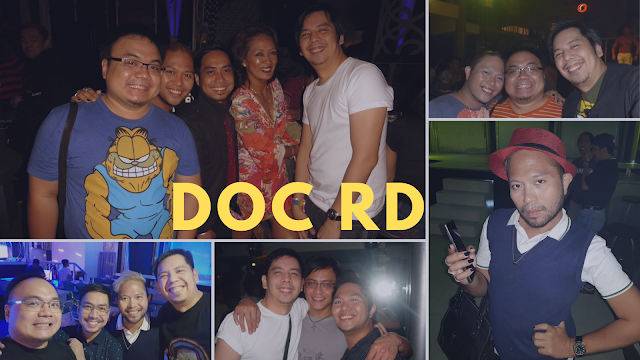 Metro Manila Community Quarantine - Day 589
We woke up to one the sort of question that immediately gives you chills - "Did you hear about RD?"

Throughout the duration of this pandemic, it feels like we've been dealing with an above-average number of reports of deaths within our different social circles. This isn't necessarily something that I can prove quantitatively. If anything, I feel like the lack of most other "normal" activities just amplifies the bad news that we receive. It does not make hearing of someone dying any "better" or "worse". It is what it is. Every death is bad. But some will always cut deeper than others.
My first encounter with RD was a warning. He was part of Tobie's circle of friends at O Bar and as I was the guy already in a relationship who was dating one of his close friends. And RD is the sort of friend who fiercely fights for those he cares about, so it took a while to win him over. In fact, he eventually told me that he really didn't like or trust me the first time he met me because of the complications I brought to Tobie's life. But things resolved themselves in time.
RD is one of the smartest people I've ever met and one of the most passionate. His love for his friends and those around him was something that he also extended to work. He could have contented himself with setting up a good medical practice here in Metro Manila. Instead, he set up shop in Eastern Samar and got involved with Provincial Health Office. And he has literally been on the front lines of the fight against COVID-19 over the past year and a half and doing an admirable job of managing their pandemic response.
I don't know how many more deaths I can handle throughout this quarantine. Losing loved ones is bad enough, but being essentially trapped in our homes and unable to help one another through emotional times like this. Tobie described it as all of us being islands separate from one another, and it's quite the apt metaphor. And this is definitely a time we wish we could be with close friends because this loss hits really hard.
I wish I had the words to fully express how I feel about RD's passing, but I don't quite know where to begin. It all still feels so surreal. Maybe he's just too busy to update us on what he's been busy with. I still kind of expect him to show up when O Bar eventually re-opens once it's safe enough.
If only.
deaths inner ramblings O Bar queer life