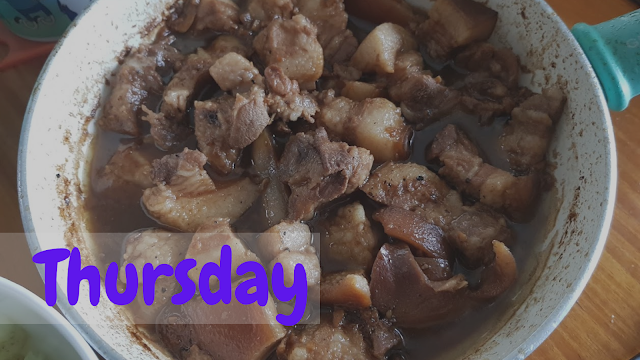 Metro Manila Community Quarantine - Day 586
Throughout this pandemic, I have continually taken photos of pretty much everything we eat save for some leftovers. And since the only other photos I take on a regular basis are tied to my workouts, the food photos end up being a safer option for me to use as header photos for this blog. But on most days, the header photo comes before the actual blog, so they rarely connect all that directly.
It's when the header image isn't of food that I probably had something more specific in mind to write about before I prep the post. That has generally been the sort of "language" of this blog, even before I started to tinker with Canva to make my headers a bit more interesting. Plus it's easier to avoid copyright concerns by using my own photos instead of pop culture images that I gank from the internet. I still do that from time to time since this is still a personal blog and not a serious commercial enterprise, but we know that can still lead to complicated situations.
In other news, lots of on and off discussions with different friends about things like movie theaters re-opening. I know I had reacted pretty strongly to the news when it first came out, but that was also when our average cases per day was still in the 5-digit range. Our 7-day average is down to 6k cases per day with our average for the month down to 9k. We're not out of the woods yet, but it does feel like there may be genuine cause for hope that things are truly turning around.
Cinemas haven't actually officially re-opened, and I hope that means that they're figuring out protocols that will minimize everyone's risk. Even though we've already watched Dune (twice!), I'd still want to see it in a movie theater and support the filmmakers properly. But it still needs to be safe, and I don't even know what that means. Shifting to keto has prepared me for a movie experience where I don't get to snack as much as I used to, so we'd definitely avoid eating or drinking throughout the movie. Beyond that, I'm not sure what to go with. Should we limit ourselves to the theaters with much higher ceilings in the hopes of better air circulation versus others that feel a bit more closed in? Can we still enjoy movies with face shields on?
So many weird questions.
But as the case numbers seem to get to a better place, one can't help but hope. Today we can talk about things like going back to the gym or watching films in a proper cinema. Tomorrow, maybe we'll be able to consider things like resuming game nights with vaccinated friends we can trust (or at least agree to risk with) or maybe even O Bar re-opening with some consulted scheme to have it operate at 30% of its declared capacity.
I want things to be actually safe for everyone, but I also can't help but wish that things will get "better" and we can live something a lot closer to our normal lives than what we've experienced over the past year. It's only human to hope for this. It's totally normal to want to not live a life where we're all forever on eggshells because of the way our government has handled this pandemic.
blogging gym life health inner ramblings moving pictures picture picture QuaranGeeking sietch life