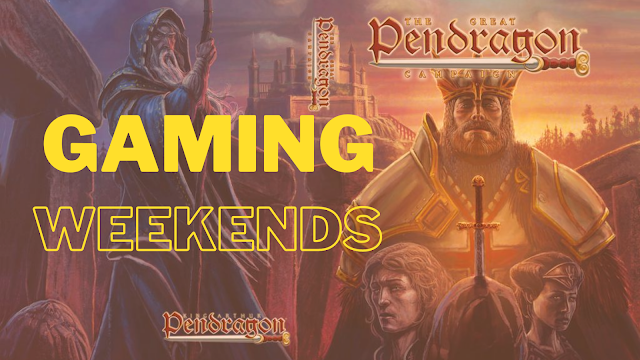 Today we had our 70th session of The Great Pendragon Campaign, our ongoing tabletop campaign exploring the rise (and fall?) of King Arthur as a multi-generational story. Depending on the player, we're either on our second or third characters at this point as we progress through this fictional history and it remains as rewarding as ever. This is our most frequent RPG session throughout the month with about 2-3 sessions where others only have 1-2 sessions. And there's still SO MUCH story left to explore. And we play so often because we've all gotten pretty invested in this story and how things have continued to progress.

I've been thinking a lot about my eventual transition into a new character - something that becomes more and more real now that my character is over 30 years old and the bigger aging penalties trigger at 35. My eldest son is still a bit of a ways away from being old enough to be a proper squire and I don't want to miss out on some of the adventures during this high point in King Arthur's reign.

After yesterday's one-shot, the group also talked about the possibility of allocating time in the future for me to run a campaign for The Expanse RPG. I'm still pretty nervous about this, but I super appreciate their support and the vote of confidence to run. I don't think we'll squeeze it in this year since it's kinda "bad luck" to start a new RPG campaign right around the end-of-year holiday season, so aiming for a January run seems like a good idea. And that gives the players a few months to get fully caught up on the show at least while I work on longer-term preparations for the game.

In other news, I just started playing Oxygen Not Included, which has made for a nice change of pace since I haven't played a PC game in quite a while. It kind of reminds me of the Early Access Spacebase DF-9 back in the day but instead of surviving in space, it's surviving underground on some other planet. It still has that feel of being quite frustrating but challenging at the same time as I try to keep pace with all their demands and figure out how to keep the colony running.

I'm still dying fabulously or at the very least I can't quite figure out certain aspects of the game, but I'm getting there. I'll need to do some research on other tips and tricks before I set up a decent base LOL