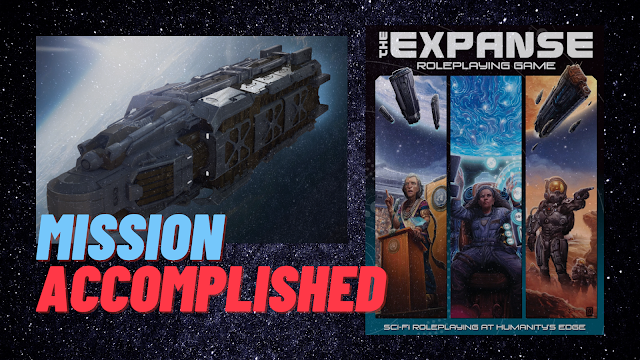 Metro Manila Community Quarantine - Day 553
I FINALLY DID IT! I ran an RPG session again. After weeks of nervous preparation and multiple readings of the rules and the scenario I had picked, I finally ran a one-shot session for The Expanse RPG. And even crazier, the game was streamed and is available online. I'm super grateful that our assembled players worked with me to make this story possible and we managed to work through some of the nuances of the system together as we played through the scenario.
It was still pretty nerve-wracking, but I think all my preparations paid off. I got most of the rules right but admittedly missed out on a few things here and there but it wasn't anything overwhelming wrong or something that totally derailed the game (I think). We got through all the key points of the scenario and had a lot of exciting combat moments including one of the players getting knocked out.
I was riding quite the adrenaline high after the session and I have to admit that I can see myself doing this more often in the near future, potentially leading up to possibly running a modest campaign or something. The creators behind the game have released Abzu's Bounty, which is a 6-part campaign that could be fun to run with the right crew. One-shot adventures are fun in their own right, but I really to be able to truly take this game system for a spin including the nuances of character creation and all that fun stuff.
I'm not sure if I'm super ready to create an original campaign/story on my own, so there is a sense of reassurance one can get from leaning on published adventures initially. But that'll just be a base framework to get things started - beyond that, the input from players is bound to take things into interesting new directions and hopefully help us develop even more stories.
But I will say (and potentially commit?) that I don't want to end up waiting several years again before I opt to run another game again, whether using this system or something else entirely.
gaming QuaranGeeking tabletop gaming