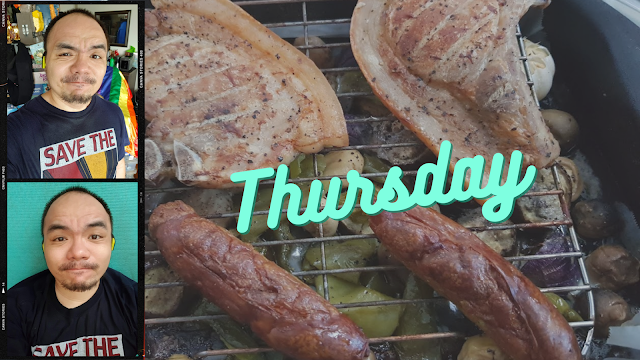 Metro Manila Community Quarantine - Day 495
It was during an afternoon client call that I realized that I had somehow missed out on shaving this week. I've had a number of early meetings this week, and I ended up prioritizing maximizing my limited workout time and foregoing things like grooming. It was sort of excusable to skip on Monday since we had the holiday the very next day. But the rest of the week has been a bit of a blur.
And now it's almost Friday and the main benefit to shaving would be to get rid of some of the annoying itchiness I sometimes get when my face fuzz gets a bit too long. And yes, I know I'm not exactly the most hirsute person around, but it gets long enough to be irritating, at the very least. The worst is when random mustache hairs get long enough to touch my lips - I'm pretty fastidious about keeping them on the right side of the fence.
This week has been kind of bananas with a whole different sort of busy tone to it. Tobie and I have had several dueling conference calls and it's a complex dance to try to manage our respective calendars without becoming a guest star in each other's meetings. And we've had more than enough work stories to share with one another, so yeah a LOT is going on.
Along those lines, I've also been trying to keep my workouts lighter but still effective (at least in theory) to balance things out. I honestly think increasing my weights on Sunday did stress my system a bit more than expected, such that it took me a bit longer to recover. And with the weekend right around the corner, I'll be dealing with the gym soon enough - at least depending on the weather. I am happy to invest some time into (indoor) jogging again. It's not necessarily the most intense workout, but it does keep my heart rate in the cardio zone more and I have the added benefit of being able to listen to an audiobook. In fact, I finished the shorter Audible Original I've been working through this morning.
It has been raining cats and dogs all week, which just adds to the stress of things. I've felt our internet single wobble and waver when things get really fierce and that makes work more challenging than it needs to be. Just another addition to this non-party, I guess.
books gym life health inner ramblings sietch life Tobie work