02972: Franchise RPGs I Could Probably Run One Day 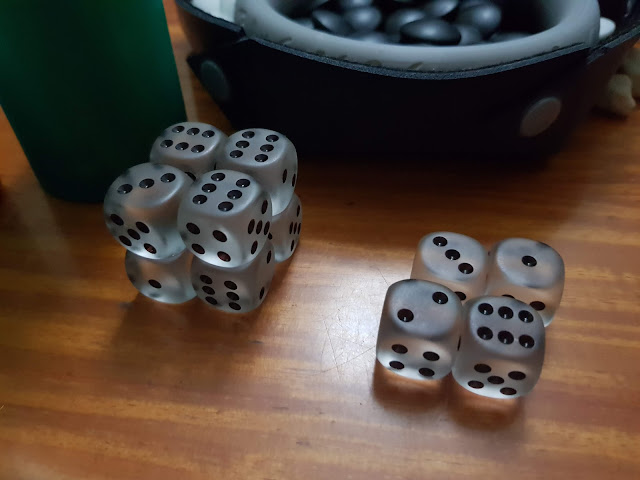 Metro Manila Community Quarantine - Day 358
While warming up for today's Pendragon online RPG session, the topic of the GURPS TRPG system came up, and that reminded me that we had a copy of the Discworld Roleplaying Game that happens to use the GURPS system as its basis.
This is just one of the many franchise-specific TRPG system books we own for games that we haven't actually had a chance to run yet. In fact, I realized that I hadn't even removed the cling wrap from our Discworld RPG book until it came up today. GURPS isn't one of the friendliest systems around and doesn't necessarily work with my established RPG playing style, but because it's Discworld, then I'd totally want to at least try it one day.
So many games, so little time! So let's cover a few of the books that we have - particularly the ones that I think I have a better chance of running one day should I work up the nerve to do so.
At least we can proudly state that both Tobie and I have played and run the Doctor Who RPG system, which used to Doctor Who: Adventures in Time and Space. I remember this mainly as one of the first RPGs that I manage to learn on my own just by reading the material given I typically rely on Tobie to teach me how the games work when he GMs for us.
I had also supported the Kickstarter for The Expanse RPG, which uses a system that has some things in common with the Doctor Who game but remains quite distinct. But like many of the franchise-specific games we own, the bigger challenge is finding a group of players who are familiar with the fiction (whether the book or the TV series) in order to fully enjoy the game experience.
Similarly, there's the Star Trek Adventures Tabletop RPG system that both Tobie and I own copies of (he bought the physical main book, combined we have all the supplements as PDFs), which I think Tobie is more ready to run system-wise but I'm probably better off handling as I know the lore more. In this age of Discovery, I think we have a lot more wiggle room for looser Star Trek game stories by more casual fans, but who knows where things will go.
We also have the preview edition of the Dune Roleplaying Game also by Modiphus Entertainment, which is yet another franchise that is very close to my heart. Tobie again is in a position to run it but would naturally defer to me should I decide to run the game instead.
I also backed the Kickstarter for Root: The Tabletop  Roleplaying Game, which is a lot easier to jump into as it is fundamentally a game that is Powered by the Apocalypse. Tobie has actually been able to run a one-shot session for us just using the playbooks, but I think I'll be able to run a medium-term campaign once I go over the full preview book that was sent to backers this week.
Outside of official games, I also have the desire to run a longer-term BattleTech RPG campaign using a Fate hack I found online. I'd still need to freshen up my knowledge of running Fate as I've only played a few Fate-based games under Tobie here and there.
Regardless of the system, the thing that still terrifies me every time is figuring out a game scenario to actually run, which feels very connected to why I don't write a lot of fiction these days. I never know where to go and naturally, I'd need to craft a genre-specific story that is suitable for the fictional setting of whichever game we end up running. And that's the big problem even before we get to the challenges of teaching players a new RPG system online, which we have found to be more challenging than we'd like.
Battletech Discworld Doctor Who gaming QuaranGeeking Star Trek tabletop gaming