02481: When You Want to Run a Non-Tactical BattleTech RPG 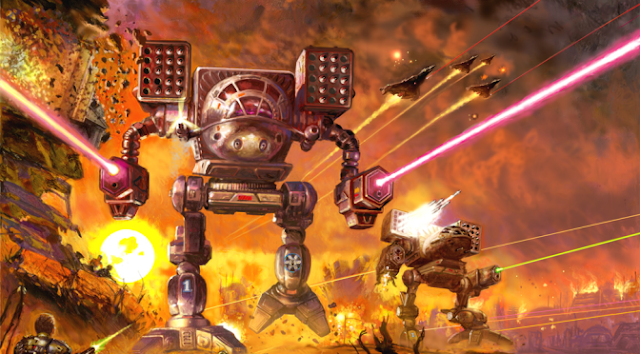 Metro Manila Community Quarantine - Day 117
So the thought of using my extensive knowledge of BattleTech to run an RPG campaign set in this universe continues to nag at me. For those of you who (1) play tabletop RPGs and (2) actually have access to this blog, I appreciate your advice and insight.
First, I really LOVE BattleTech. I first got into the franchise through the first MechWarrior PC game and then I got heavily into the fiction books set in the universe. I've been following the books for most of my reading life and I continue to pour a ridiculous amount of time into exploring the rich back story of this strange futuristic yet feudal society. Since then, I've played a few of the other computer games and even the collectible card game but I've never touched any of the tabletop RPGs.
Second, I'm really more of an RPG player than a GM. I've run a few one-shots, mainly using the Doctor Who RPG system and something with an old home-brewed system that tried to emulate Magic: the Gathering. But that's not exactly a heck of a lot of experience running games. But every now and then I wonder about running a longer-term Doctor Who game. At the same time, I've been excited to dig into the RPG system created for The Expanse and maybe even the Star Trek game.
But of all the fictional worlds that I know well, the BattleTech universe does seem to be the most promising for an RPG campaign, especially because it has so much history for me to play around with. I know, it's unlikely that I'll find players who know the universe as well as I do. But at least it's a game setting where I feel confident about the ins and outs of the universe from almost any angle. And that's a nice place to start an RPG campaign at, I guess.
However, the roots of BattleTech as a tabletop experience are rooted in the tactical war game. And I'm really not much of a tactical RPG player as Tobie has spoiled me to enjoy narrative RPGs for most of my RPG life. And I've been looking at all the official BattleTech and MechWarrior material to see if any of the official games present a way to embrace this concept. Spoiler Alert: the answer is no. Official BattleTech rules always lead you back to the big war game for mechs and have Shadowrun-style rules for interpersonal combat.
But this idea has really been buzzing in my head today and Tobie's been showing me different systems to see if any of them might be able to help. Thus I've looked at things like Lancer and even considered Beam Saber. I could try to re-tool one of these other games to fit the mood, but then someone else in the BattleTech community shared his custom rules for using the FATE system to run a BattleTech game, which probably shows the most promise. I don't particularly like this system due to insufficient "dice satisfaction", but the hack a fellow fan shared does show a lot of promise. And running the game will mean fewer dice rolls than the players, right?
Tobie asked me what about the BattleTech universe do I want to capture in a game. And it's a good thing to keep in mind when trying to find an RPG for a story you want to tell. And in all honestly, I want to find a way to help the players feel the excitement I feel when I think about this universe and its history. BattleMech combat is still important, but I don't want to get overly bogged down by this either for it to interrupt the story or something.
But of course, we're all in quarantine, so who knows when we'll actually have the time and the players to run this game? But yeah, that's what has been on my mind this week. And I like thinking about this more than everything else going on in the world.
Battletech books gaming inner ramblings robots rule sietch life Star Trek tabletop gaming Tobie