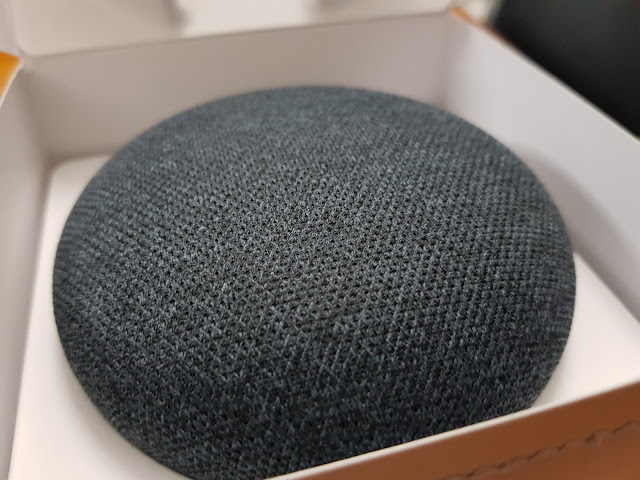 Metro Manila Community Quarantine - Day 242
Christmas 2017, my sister gave us a Google Home Mini. As given what a Googlephile I can be, I was pretty excited about adding this element to our home. While we're not exactly swimming in "smart" appliances. And in the years since we've added this to the Sietch, we've mainly used it to interact with our Chromecast as a verbal remote control (e.g. "Play Forensic Files on Netflix on Screen"), ask random questions, check the weather, or sometimes play music. It hasn't been great at playing stuff from custom Spotify playlists, but it does work when you want to play a specific song or just a mix of songs from a specific artist.
Despite our limited uses for this smart speaker, my surprise 11.11 purchase was finally getting a second Google Home Mini for the bedroom (and indirectly the bathroom) to expand our coverage. Primarily, I want to be able to play music so that it's audible throughout the Sietch, especially for when we're in the shower.
Kylie Minogue's new album Disco debuted last week and was made available for streaming on Spotify and even YouTube. As Tobie is not a Spotify sort of person, I played the whole album on our Google Home and we got to enjoy it together. And this was the day before Kylie's Infinite Disco event.
The cherry on top was Kylie launching #DISCOTV on YouTube, which is basically an ongoing live stream of her music videos playing nonstop. At first, it was just novel since the stream digs up videos from all across Kylie's colorful career. But more and more I find myself tuning in just to think about happier times and get Tobie to dance goofily with me in the living room. And just this morning I had Tobie asking me to load the Disco TV stream on the TV because he was LSS-ing on songs from Kylie's new album but wasn't quite sure which one.
This quarantine has not provided many great opportunities to dance. As much as we can organize online drinking sessions with friends, this largely means all of you sitting in front of your respective webcams and largely staying there. Dancing isn't a great activity for a video conference since you'll be bouncing in and out of frame, so we haven't had a lot of reasons to dance.
But since the weekend, we've been indulging with random dancing sessions more and we've been leveraging both the Google Home Mini and our Chromecast to get the party started, as it were. And I'm not complaining. Dancing at home may not be the same as dancing in the middle of O Bar, but it is nice to have music we love permeating the Sietch.
This got me to finally try to assemble this AIY Voice Kit my sister had gotten me for Christmas last year in the hopes that it would act as a rough Google Home speaker, albeit one made from cardboard. But it's really more a programming project that allows one to experiment with Google's voice recognition API and such, so it's an entirely different source of geeky entertainment. But today's 11.11 sale pushed me to officially get a second Google Home Mini unit since it wasn't even P1,200, which is kinda crazy. I'm looking forward to being able to play music more freely from pretty much any location - give us enough time and I might even add a third unit for the kitchen just so we don't have to shout as loud to trigger one of the units.
And we're definitely going to dance more.
Google inner ramblings O Bar QuaranGeeking queer life sietch life technology