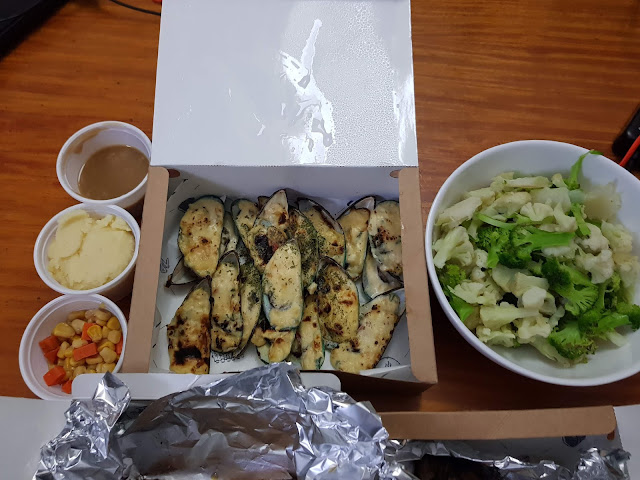 Metro Manila Community Quarantine - Day 214
Given how busy we've been this week plus the fact I have been feeling some food fatigue recently, Tobie has been experimenting with restaurants we don't normally order food from. It has added a bit more variety to our menu although it's always a bit of a potentially painful experience given it's hard to find places we like and aren't too costly. Throw in my keto limitations and options are really quite limited.
The other day it was steaks and baked mussels. The mussels were decent but not worth repeating. The steaks weren't medium rare, which is a risk of any delivery steak. The steaks had an overly harsh sear that tasted burned and probably would have been more palatable with the gravy that came with it. But I skipped the gravy since it looks pretty carby.
Today Tobie found a keto pizza that we could order. It wasn't too bad and the almond crust was rather crumbly, so it felt more like a pie crust than a pizza crust. I think the best compromise in this area is to aim for more of a tortilla-style crust than a full pie crust so it at least feels more like a thin crust pizza. But this was a nice surprise as I had really missed having pizza. I'm generally okay without but every now and then my geeky self sort of looks for it.
But man, I'll need to make sure to work out tomorrow. As much as the net carbs are low, I'm sure the overall carbs are still high and we made sure to finish that pizza over lunch haha. Oh life.
But seriously, it's not like you expect me NOT to workout tomorrow. I do some sort of physical activity every day ranging from restorative yoga to stretch things out more to the more intense 45-minute bodyweight workouts that the Nike Training Club app assigns me. I'm kind of addicted to seeing my weight numbers go down post-workout. Days when I don't do anything strenuous just leave me a little disappointed with my weigh-in, but that's life as well. I know I need to pace myself.
And that's my hump day blog post.
food adventures gym life health keto life sietch life Tobie