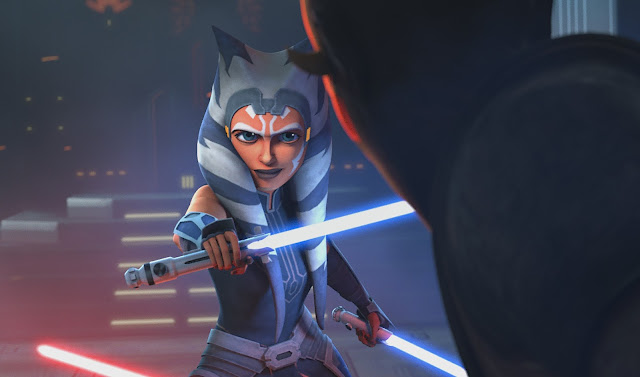 Metro Manila Community Quarantine - Day 51
Today is Star Wars Day because geeks do like puns and May the 4th is close enough to sound like "May the Force" as in "May the Force Be With You". I'm including this explanation in case you're one of those people who like to tell people that they've never seen the Star Wars movies before.
Yesterday Tobie and I finally settled in to watch the seventh season of Star Wars: The Clone Wars. Despite my excitement over this new batch of 12 episodes since the time it was first announced, I haven't been rushing to watch the new episodes since it'll be the last of Clone Wars that we're probably going to get. This is me having live with the concept for years that Clone Wars was never going to get a proper ending beyond half-produced rough animatics and episodes adapted into other media like comic books and novels.
And between Clone Wars and Star Wars: Rebels, these "core" animated adventures in the Star Wars universe all boil down to an amazing character arc for one Ahsoka Tano. Like many fans, I hated her when she first debuted since she was designed to be annoying and obviously was crafted to pander to children just like Jar Jar Binks. But the miracle of Dave Filoni and his work with these animated shoes is that he goes so many of us to fall in love with her.
At the end of the day, I'm sure most of us are on board for this new Clone Wars journey because some of the biggest unanswered questions from the truncated show were what happened to Ahsoka after she left the Jedi Order and what happened to Mandalore. New shows like The Mandalorian may help answer that last question, but the core action takes place in the prequel era right before the events of Episode III.
This last season is classic Clone Wars, but more beautifully done with modern animation techniques. It's a labor of love that isn't perfect since it maintains some of the uneven writing of the original series but I'm still glad that they focused on stories originally written for the series instead of creating new stuff just for this revival. And they've also made an effort to avoid touching on stories that were adapted into other media so those stories remain intact in their own part of the Star Wars universe. It's these little things that ultimately excite me.
I can talk about Ahsoka all day. It totally beats just talking about our unchanging trend in COVID-19 case growth over the past 2-3 weeks.
QuaranGeeking Star Wars television