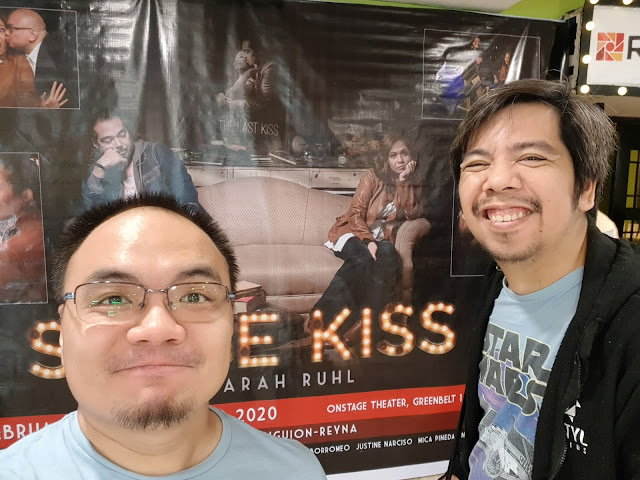 Today was a welcome rest day versus the last two nights, at least relatively speaking. The main objective was just to watch the first show in Repertory Philippines' new season - Stage Kiss. The play was pretty hilarious and I concede that I have a soft spot for play-within-a-play type stories. Consecutive O Bar nights are never ideal for one's constitution, but ultimately we don't regret having gone out last night. Apart from Gigi's special birthday show, everyone was still basking in the afterglow of the Manila edition of Werq the World, where the O Divas got to open for. And as a bonus, some of the RPDR queens went to O Bar for the afterparty.

As crazy as the crowd was given it was a special event Saturday night, Tobie and I still had a generally good time despite the inevitable stress that comes with that many drunk people in a limited space. And it was a special treat to not only see the RPDR queens appreciating the show, but to have the likes of Detox to say that it was the best drag show in the world. We love O Bar to bits and it's always great to hear other people, especially the global superstars of drag, to say how much they love the show, too.

Yesterday was also this month's FGTC game night and although we had to leave early for O Bar, we still got a lot of good gaming in including trying out a new Concordia map, learning how to play Heaven & Ale and introducing everyone to new games including Champion of the Wild and Chope! the card game. It would have been to keep gaming well into the night but I think we ended up with a decent balance between our different plans for the night.

Today I surprised myself by waking up earlier than feared and that gave me enough time to visit the gym before we headed to Makati for today's play. It's the first time I've ever hit the gym on a Sunday and I used the time to also check out another Anytime Fitness branch apart from my home gym at Bonifacio High Street. So my workout for the day was at the Burgos Circle branch that I originally wanted to sign up for had it not been for a less than ideal reception when I made my inquiries.

So today started with a workout, then a gym session, followed by a stage play, and capped with a hearty shabu-shabu dinner. Now we're catching up with the new season premiere of RuPaul's Drag Race and considering tabletop game plans for the night.