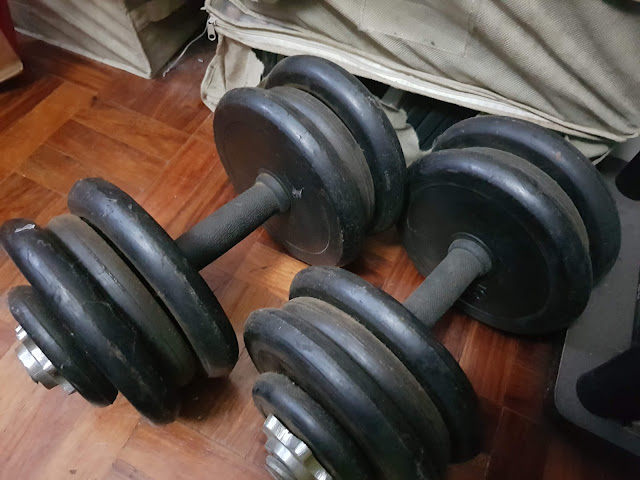 Join me on yet another effort to use my blog to put into words how I overthink a question!

So given the ongoing volcanic activity of Taal Volcano, it has been less than ideal to jog around BGC. Officially the winds around Taal have shifted in another direction and Metro Manila is no longer experiencing active ashfall. However, anyone who walks the streets of BGC would know that ash remains everyone and it'll be a while before things are truly clear and the smell of sulfur is entirely gone. Given that, I haven't been able to resume jogging this week for fear of triggering my asthma. I could theoretically try jogging with a mask on, but I doubt I'd survive that.

This situation came up while talking to my sister and she asked the classic question of whether I'd ever sign up for a gym. The tiny gym at the condo annoys me and is filled to the brim with residents in the hours before work, making it practically unusable unless I go during very off hours. Working out where other people within a small space rather stresses me out, something which I talked about somewhat in this lengthy Twitter thread on my fitness efforts.

Over 10 years and one full relationship ago, I did try going to Slimmer's World for a fair 6 months and did somewhat okay. It was a low traffic gym and since I worked at night it meant I was at the gym at relatively quiet hours after the morning rush. But it never really stuck for one reason or another - a big factor being the gym wasn't near work nor home. I had to distinctly go out of my way to work out and it made it really easy to make excuses.

I initially dismissed the notion of going back to the gym when it came up, but naturally a part of my brain began to chew on the question and I even sent feelers out on Twitter for whether it would be a good idea or not, because yes social media validation always helps. I've bounced the idea around with Tobie and the real question is how we'd fit any gym time into our routine given we do work hard on maximizing our time together despite work and other obligations.

I initially suggested that we should go to the gym together, but that messes up dinner plans and admittedly part of me is uncertain how to feel if Tobie and would actually work out at the same time. I know realistically it's not like we'd be talking the whole time and we'd probably lose ourselves in our respective routines and audiobooks, but it's just something to think about. Thus I refer back to the aforementioned Twitter ramble about being uncomfortable working out with other people around.

Should I decide to actually do this and sign up for a gym membership, Anytime Fitness seems to be the most viable option since (1) there are three locations relatively near the office (literally surrounding it) and (2) membership will also provide the option to use Anytime Fitness gyms in Singapore, which would be a major step up from pacing the hallway of my sister's place for hours in order to hit my daily step goal. But it's a significant investment and I still haven't quite worked out scheduling in order to make the most of it.

Did writing about this help me to any degree? No idea. Will this result in me figuring out a home workout routine instead? Maybe - but I tried yoga at home for a while and fell off that wagon quicker than expected. One factor there is probably the fact that Tobie is home a lot more in the morning and that irrational shy feeling about working out with someone possibly watching majorly kicked in. I know I shouldn't feel that way since Tobie is my life partner and not some stranger, but the feeling is still there and I've yet to shake it off.
health inner ramblings keto life sietch life