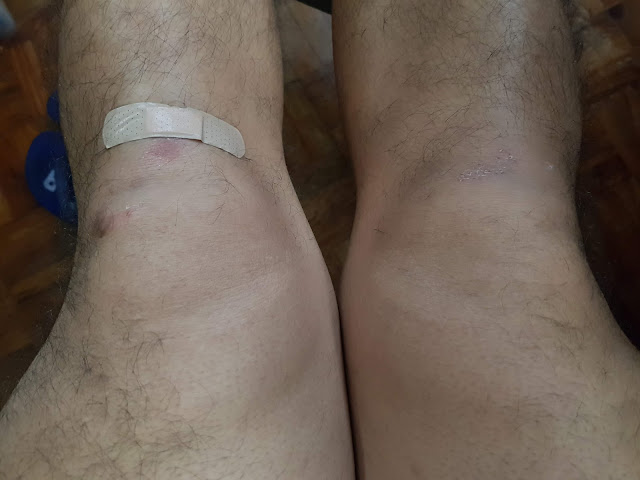 I may have spoken too soon when I wrote about the many things I seemed to have in common with my biological father as of late. One running gag in the family is how clumsy the Sunico side tends to be as best modeled by him. He had horror stories of falling into open manholes while jogging at night while it was raining.

At least my incident did not involve a manhole.

I already wrote about this incident on my social media and I'd rather not rehash things. Ultimately, it's an annoying, stupid accident that resulted from me not being careful enough, which is rather funny to say since people do know me to be VERY careful about most things. In truth, I feel that my cautious nature is largely because of a conscious effort to try to avoid the clumsiness tendency in the family, but I don't always win out. Today was one of those days.

As expected, the bruising has set in and my left knee looks a lot worse than it feels. I've yet to change my Band-Aids just yet so I don't know how things are progressing, but I do feel a little tender when I move around. It's not enough to call in sick but it's enough to make moving about more annoying than it needs to be. My left palm is pretty good but my right hand definitely stings. As is the nature of injuries, I'm discovering just how much I use my palms for activities because of my abrasion.

I'm undecided if I'll still jog in the morning. I definitely want to, but I'm not sure if that's the smartest thing to do just yet. It's all a bunch of surface-level injuries so it doesn't mechanically interfere with my ability to run but it may just be more prudent to err on the side of caution. I'll know in the morning and check on how things feel.
health sietch life