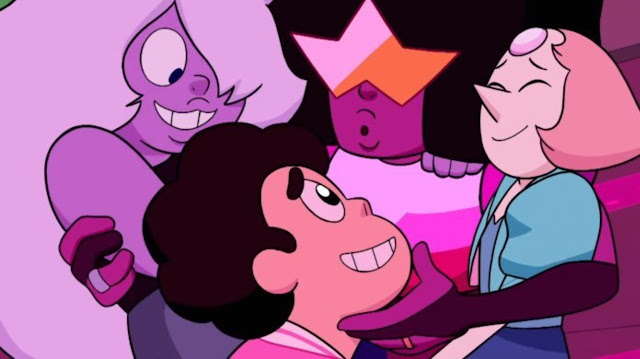 Tobie and I finally watched Steven Universe: The Movie and it was a really beautiful experience. And while there is no official news whether the show will continue on for a sixth season, between their fifth season and this movie, they could leave the show in a very solid place.

Without going into spoilers, what I can say about the movie is that it's a brilliant celebration of the core themes of the show. I've repeatedly stated that Steven Universe is a show with love at its core. But beyond that, this is best demonstrated by how Steven has always done his best to see the best in others. Sure he can fight when he needs to and his power set is highly defensive and focused on healing. But really, Steven has "won" more battles by talking and reaching out.

Sure, from a practical standpoint, diplomacy alone isn't always going to work as a strategy for dealing with all the challenges life throws our way. But then there's something fundamental that should tie us all together that we should still try to believe in. It's hard to see the good in everyone sometimes but if Steven could do it, why can't we try it, too, right? We all should try more - not just once.

The real world is harsh. People can be terrible. But they're not always terrible, right? That's the lesson that drives the show and more of us could benefit from trying to change our minds a bit more.'

Gah, this all still feels like quite a ramble. We're going to be reflecting on the story of Steven Universe for YEARS to come and I'm sure we'll continue to find new meaning in the show upon repeat reflection.
inner ramblings moving pictures Steven Universe television