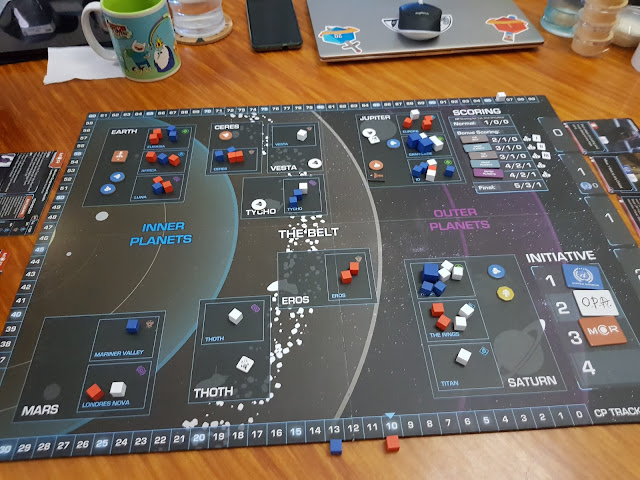 So one of Tobie's birthday gifts for me this year is The Expanse Board Game, which admittedly did not initially excite me as a game given it had a strong area control mechanic but my love for the franchise mostly won out. We finally got to try the game tonight and we were all pretty surprised at how tight the gameplay was and how they cleverly managed to incorporate some of the themes and elements of the show to really give the game some distinct flavor.

We all just wish the game components had gotten more love. We have rather generic tokens to represent the ships and they don't even feature unique ship art to stress the feel of the show. And the card quality isn't great but hey, at least the game exists.

Tobie pointed out that we can use the board game when running the RPG based on the franchise, which is a pretty cool idea. It does have the potential to act as a solid backdrop for mapping out travel around the system and maybe even some space combat sequences.

So yeah, it's a surprisingly great game and I'm excited to see how we'll either upgrade the game components for more appeal or how we'll use the board in an RPG in the future.