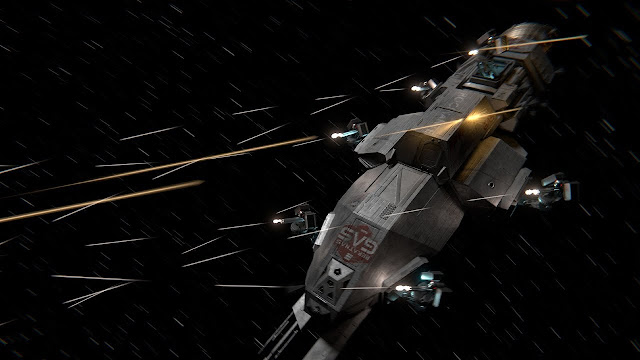 The idea of running an RPG session for The Expanse is steadily growing in my head and now I'm officially getting started on the books beyond reading the RPG system book to really get into the mindset for things. As much as I love the show, I've delayed reading the books in order to focus on titles that I had already purchased for my Kindle as my current rule is to avoid buying new books unless they're on sale or I'm literally about to read them. Now I'm making the shift to read the books for real and I have a weird mix of the titles in on particular order as I stuck to which ones are on sale. At the moment I only have the first book and a number of the short stories, but that's about it. We'll see if I'll feed the need to jump to the next book in the series right away or if I'll segway to other books first to minimize immediate expenditures.

Haha, famous last words. I'm totally going to end up buying the whole series before I'm even ready to read the books.

I'm not sure what kind of adventures to run with this system. It's sort of triggering that part of my brain that initially pushed me to try to write science fiction stories I guess. It's a weird part of my brain, one that much better appreciates science fiction as a setting but not automatically the story itself. And the world of The Expanse is an interesting near-future that is quite "hard sci-fi" but also familiar enough to use as a springboard for all sorts of stories.

I just have to figure out where to start this journey.

I appreciate how the system is flexible enough to tell different sorts of stories. We could do a military-focused adventure on a big ship that would be a lot more BSG/Star Trek in tone. Or we can go with the solo ship route that rangers from truckers in space to full pirate action like Firefly. But I feel like I need to embrace the setting more to get a better feel for things before I can tell a solid story through an RPG campaign.

Or maybe with the right mix of players we'll end up creating that awesome story together.
books gaming tabletop gaming writing