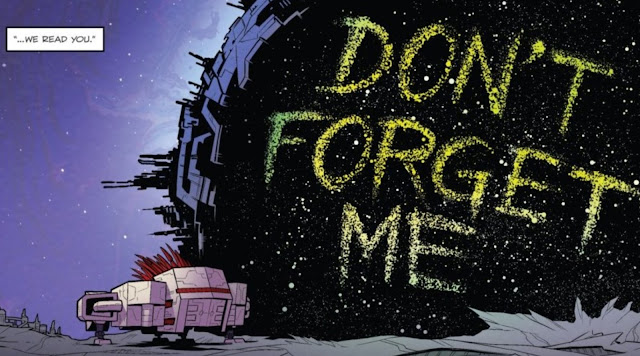 So I'm going through the last comics of the current IDW run of The Transformers and the feels are hitting hard. It's all sorts of amazing what they managed to create across over 400 issues published since 2005. I had totally underestimated the line at first but with each new chapter of their larger story I fell more in love with the unique Transformers world they had created and it made me an even stronger Transformers fan.

As much as the current publishing run with more officially end with Optimus Prime #25, the comic that has really wormed its way into my heart is Lost Light, which continues the quirky story begun in More Than Meets The Eye. James Roberts managed to create something that had so much heart and did a lot to rationalize how a race of cybernetic sentients might actually live outside the marketing-defined eternal conflict between good and evil.

It's easy for the dudebro machismo segment of the Transformers fandom to dismiss a lot of his work as trying to introduce "gay" stories into the franchise, but at the end of the day they're robots with no practical need for gender. Instead we have the concept of the Conjunx Endura, which is the Cybertronian equivalent of being someone's spouse.  It's not about two "guy" characters being together but two sentient robots finding a deep form of companionship that their wars have left them with little time to really enjoy. And that's something we ought to give to them as Roberts has given to all of us readers.

IDW will come back with new Transformers comics some time in the future - supposedly in 2020. Or maybe another publisher will take up the reins. All I know is that I have enjoyed these stories that have made the G1 Transformers so much more than meets the eye. And for that I am greatful.
books comics Transformers