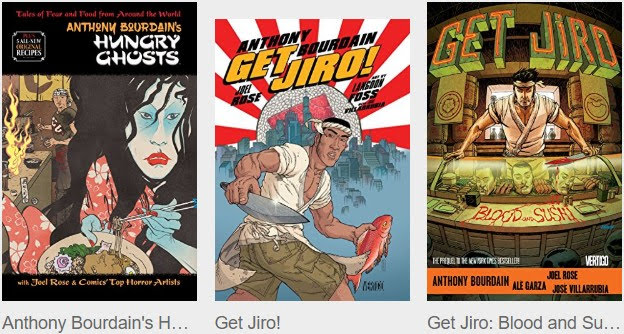 With the wide variety of Halloween-related sales on comiXology, I finally picked up digital copies of Anthony Bourdain's graphic novels - Hungry Ghosts, Get Jiro, and Get Jiro: Sushi and Blood. As much as he is most known for his essays about the American restaurant industry and of course his many different travel shows where he got to showcase more obscure cuisine around the world, his writing efforts also included these little ventures. It's not quite something I expected but my curiosity eventually got the better of me and I finally dove in to see what they were about.

The food theming that colors these books certainly adds a distinct Bourdain stamp to things as he finds ways to keep it pretty central to the overall story. I've only been able to read the Jiro books and those are set in a weird future where America has been completely taken over by crazy food culture to the point that restaurant conglomerates now act like gangs. And in the middle of it all is a Japanese sushi chef who only wants to make an honest living doing something he enjoys.

And this is all a reminder of Bourdain's creative ventures outside his travel shows and other media ventures. Apart from these graphic novels he has also written a series of "culinary mysteries" which now intrigue me more if these graphic novels are any indication of how he weaves together his love for food with a good story. They're not necessarily the best comics in the world and they don't distinctly sound like him but it's nice to explore another side of a man I've come to admire as an essayist.
books comics food adventures