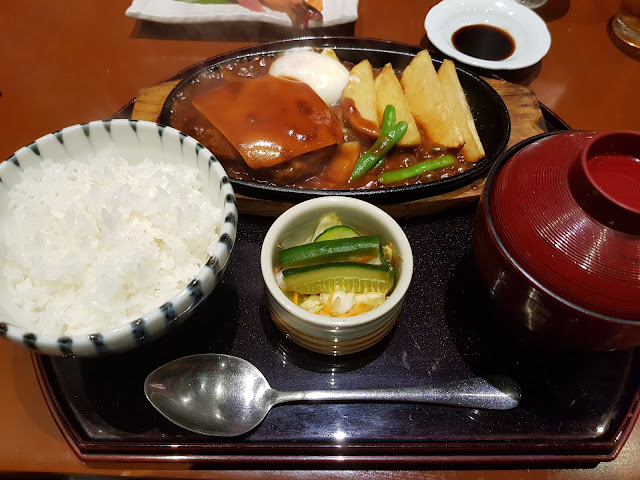 I've already written about our tendency to opt for Japanese food when we eat out, today's dinner not only supported that but also touched on a quirky nuance. Now if you've spent any amount of time watching the Netflix episodes of Terrace House, then you might be familiar with how the house mates typically end up cooking hanbāgā or hamburger for dinner. And so it has become a sort of running gag for me and Tobie to want to order a hanbāgā and a highball whenever we're at a Japanese restaurant.

So today I finally gave in and at least ordered the hamburger set and it was...okay? The burger wasn't overly seasoned and nicely cooked through without being well-done. The rich gravy it came with had distinct notes of tomato but it wasn't a ketchup either. And it came with one of those delicately poached eggs that was a nice touch. I'm not sure if I'd order again but it was just amusing to order a hamburger plate at a Japanese restaurant as that always feels weird to me. I guess it's one of thsoe reminders that like the Philippines, American cuisine has left quite a mark on Japanee culture so much so that hamburger steaks are really a thing.