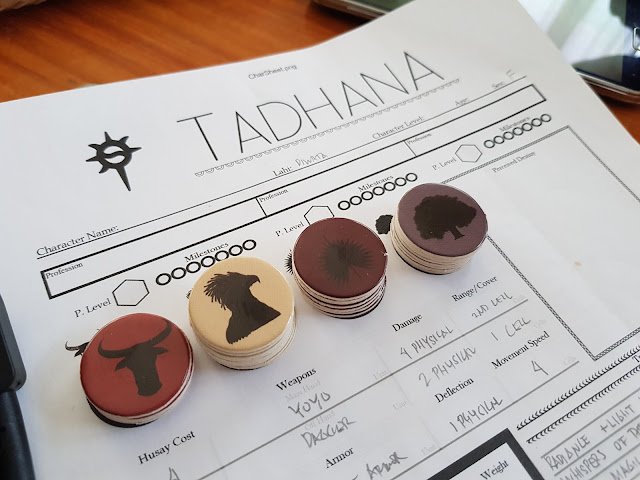 Today Tobie and I got to play Tadhana under Nathan Briones, lead writer and developer of the Filipino RPG. He's a super humble guy who has created a rather lovely game that was quite a lot of fun to play. I was a Diwata Salamangkero while Tobie was a Tikbalang Mandirigma and we were joined by an Aswang Pana. Quite the diverse little party and we surived a raid on small town precisely to target an aswang child.

I'm super in love with the magic system of the game, probably because it echoes other systems I've enjoyed like Changeling the Dreaming or even echoes of the toolkit nature of Ars Magica. It's a lot simpler and somewhat more streamlined for easier digestion and it allows you to mix and match elements to come up with your own spells and powers. Such systems can be pretty overwhelming at first but once I hunkered down with it I was pretty sold on it and happily mixed and matched to create my initial power set.

We had enough time to resolve an initial encounter and some story points beyond that but the action was clearly ready to pick up and take things even further by the time the session ended. It was awesome to play the game with the guy who made it really and get to hear his insights on why this or that system was done in that manner. Plus some discussions on where he hopes to take the game in the future.

It's not easy to create something like this and take it to market and I'm glad that he took the leap to put his work out there. We need more local creators out there - myself included if I can get over my own creative hump.
gaming sietch life tabletop gaming