02B8B: Getting Fiber to the Sietch 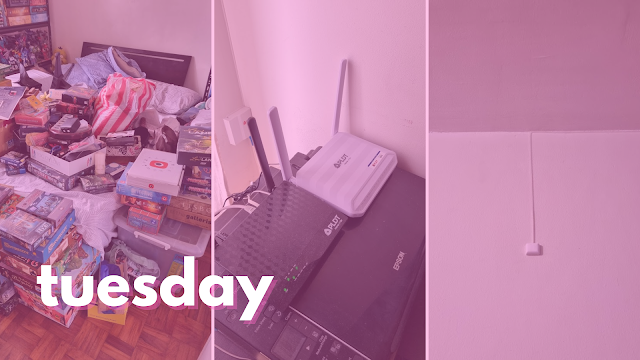 Metro Manila Community Quarantine - Day 899
Across my prior BPO career, I managed to work for a number of different US telecommunications clients and managed to amass a fair amount of knowledge about different broadband services. I'm pretty sure it was back in 2004 that I first read about fiber-to-the-home broadband service (as it was called at the time) and the notion of the technology was pretty exciting even then. But at the time we only really had dial-up, DSL, and cable internet solutions in Metro Manila with some isolated satellite internet providers trying to make a dent in the provincial market. Needless to say, fiber internet has been a bit of a dream of mine for a fairly long time.
I have repeatedly applied to upgrade our PLDT DSL service to PLDT Fiber for literally YEARS now - like we first applied when PLDT Fiber was still called Fibr, which is no longer the case). Still, every time I've applied, I find out that there are no available fiber facilities at our building (both our Cubao and BGC condos) for one reason or another. I had gotten pretty diligent about filing new inquiries every 6 months given all the PLDT signs around BGC proclaiming that this is a highly connected city and all that jazz. I think I've filed at least 3 or 4 separate applications ever since we moved to BGC and it's only today that we finally got an installation to proceed.
We had seen the additional fiber boxes added above every door for some time now and had heard it was related to fiber availability. But I know my last application was around that time and it still didn't pan out into anything. It wasn't until I saw a PLDT Fiber booth in our lobby that I figured it was FINALLY safe to put in a request to upgrade. I was still doubtful and had a very "I'll believe it when I see it" mindset given our past failures.
I had originally scheduled the installation for yesterday given we were both off for the holiday, but that also meant they wouldn't have access to specific parts of the building infrastructure, so that was a no-go. I requested to reschedule for this morning knowing full well that this would risk some meetings. But I had a more important client appointment in the afternoon, so I figured better sooner than later. We never got a confirmation call from the PLDT tech team that they'd be coming today (I guess because of the holiday) - so it was a bit of a surprise when Reception called to let us know they were actually here this morning.
There was a significant gap of time between when Reception first called and when they finally came up. It turns out that we weren't the only Fiber installation scheduled for the day plus they had lunch first before making their way to us. And when they got around to us, the real problem was that they needed to manually run the fiber optic cable into the unit, which meant clearing our geeky stuff in order to allow them to bring their ladder around the unit. That resulted in a bit of a mad dash to haul things into our bedroom (temporarily) and to move our game shelves out of the way.
We got it done - thankfully it was a lull between meetings. And the installation process itself was kind of fun to watch as it involved (1) drilling a hole to run the cable from that weird box outside into the unit, (2) then lining a path with sort of a fancy roll of double-sided tape, and then (3) running the fiber cable where they put the sticky tape in order to get to the corner of the living room where our existing DSL modem is (because the phone box is there). It all took less than an hour and now we're just waiting for them to activate the service (and thus kill our existing DSL service), which I figure will happen sometime tomorrow.
So this is our last night on DSL. By tomorrow we should be surfing the internet at much faster fiber internet speeds...for about the same monthly fee as we're paying now. The telecommunications industry is bonkers that way.
sietch life technology