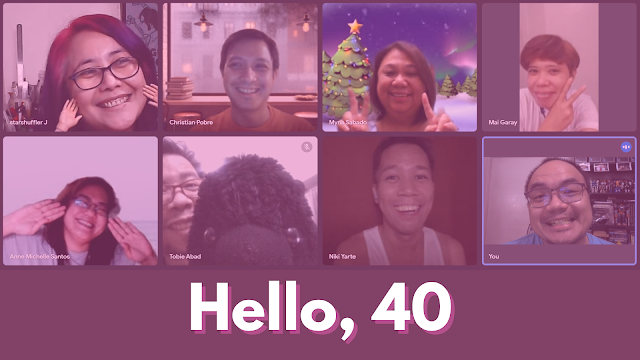 So, I'm now 40 years old. It's not a number I have a strong affinity for - it factors a little weird and I've never been a fan of even numbers or those divisible by 5. But we're a Base 10 species, so numbers like this are somewhat milestones.

I don't know what "feeling 40" is supposed to be like. I've largely just been me all this time and I haven't had major issues about that. And this is not to say that I haven't experienced personal growth - but I don't necessarily feel that much older. But that's how time gets you, I suppose. It's all very subtle.

I can't say that nothing has changed either. I've often remarked that I feel I'm now at the healthiest I've been in years thanks to following the keto diet and working out fairly regularly. But I've also managed to injure myself on a regular basis as well, which just stresses the limitations of the body that I have to work with. And I've already written about many ill-timed ailments that Tobie and I have been struggling with this week that nearly ruined my whole birthday weekend. So yeah, I can only go so far the more years I rack up.

But I'm also very happy despite having somewhat retreated to narrower social circles during the extended quarantine period. We may not be hanging out or interacting with as many people as we used to, but the quality of those we keep close to us definitely feels a lot higher and I have no regrets there. As you get older, it becomes more important to invest more time and effort in friends who matter more versus needing to play the social game with so many other people.

What do I hope for as I turn 40? I dunno if any of you are actually asking this question, but I'll write down a few things. Of course, health seems to become a big consideration now - I hope Tobie and I and our families continue to stay strong and healthy despite the different pandemic events we seem to be going through. We're still young and we have a lot of things that we need to do in life and I don't want to be denied the opportunity to do so. I also want to continue to spend more time with important friends and of course family. The pandemic forced us to become socially distant from one another, so all the more it's important to invest in your friends now that we can move around again.

A medium-term goal for me and Tobie is figuring out a living solution that will allow us to better store our geeky collection of Transformers, board games, comics, Star Trek model ships, and other bits of geekery. I don't think that's going to happen in the next few years, but it's something we're keeping on the radar because we really have a LOT of stuff haha. No regrets though - I love our mess.

My thanks to everyone who has taken the time to greet me on this solar anniversary. I love everyone who found a way to spend time with us whether in person at O Bar or virtually for our game nights and what have you. And for those who haven't, it's not an issue - life is kind of crazy. We'll reconnect soon enough.