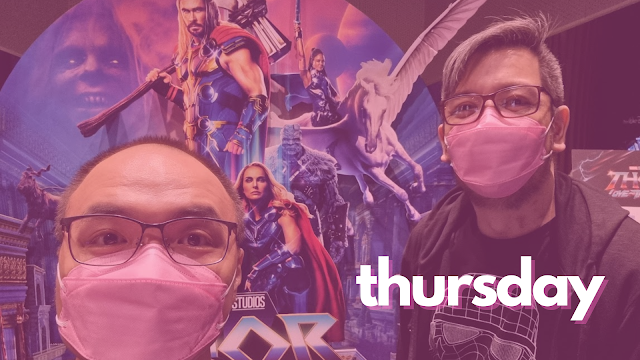 We made today a movie date night of sorts - although what this really meant was that we stepped out to watch Thor: Love and Thunder. It wasn't quite a full date experience since it was ultimately simpler to have dinner at home rather than try to find somewhere we (I) could eat that was near enough to the cinema that wouldn't make us late. And it's not like I can eat popcorn either, so really we just go out to watch the actual movie.

TL;DR Review: the movie was okay, but it felt a little uneven and had a lot of odd narrative moments. It was still nice to watch it in the theater though.

Marvel Phase 4, of which this Thor movie is a part of, has been a little underwhelming overall. When the first few Marvel movies came out, you could feel that things were building up to something big - that was initially the first Avengers movie and later on the whole Infinity War thing.

This time around we started with Black Widow, which really felt like a one-off. That got a lot of Thunderbolts chatter going, but we don't have anything definite there. Shang-Chi remains one of the best movies in this phase, but it still wasn't quite a home run. Eternals wasn't much to talk about. No Way Home was pretty good, but for different reasons and it's not super tied to the core MCU. Multiverse of Madness was pretty fun, I'll admit - and it still felt like a bit more fun than Thor. And now we have this new movie.

And this deep into Phase 4, I still don't feel like we're building up to anything specific. Is it going to be a multiversal war? Will we get the Thunderbolts? Or the Young Avengers? Is Kang really our big bad guy? Will Doctor Doom may a surprise reveal instead? Everything still feels up in the air. As much as you'd want there to be some degree of secrecy around the future plans for the MCU to give us some mystery. But they still need to give us something to work with.

And having Phase 4 lean Disney+ really doesn't feel like it's paying off since people are watching some of these movies without the context of the exclusive shows, which dampens the impact of the stories being crafted.