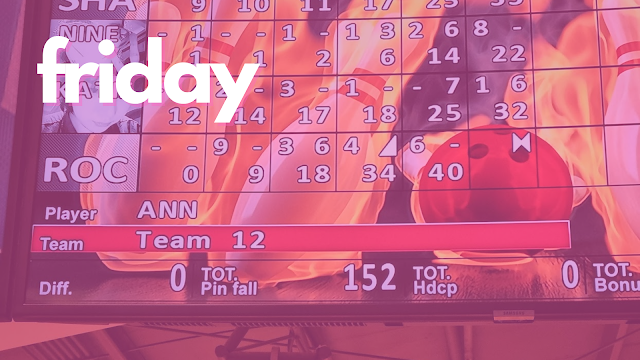 The last time I had ever gone bowling was maybe 15 years ago. I was still in my previous relationship and working at a BPO, so it feels like a lifetime ago. But when the team voted that their preferred meet-up venue for our company's first-ever in-person meet and greet for the year was going to be held at a bowling alley, I wasn't quite sure what to think. But it was still a chance to meet a lot of people we've mainly interacted with online, so I was still pretty excited to go.

It goes without saying that I'm terrible at bowling. At least I had some random strikes here and there, so that felt kind of good. But I had a more than generous number of gutterballs, too. But that wasn't really the point since it's not like we played a serious game and people were generally just stepping up to the lane regardless of whose turn it was just to see what they'd get - the benefits of booking the VIP area with two private lanes so everyone else at the place can't see how crazily you're all playing.

As much as working from home has its benefits, there's something to be said about sharing a physical space with your team. And we definitely have a wild bunch of creative characters and it was nice to see them interact beyond Gather Town or our Google Meet game nights. Despite the complexities of bringing everyone together, it certainly felt like it was worth the effort.

And we have a bigger gathering of people planned for the end of the month which should be even more fun. Totally looking forward to that logistical nightmare. I'm not even kidding.

We really need to figure out what our path is going to be like moving forward. I don't think we should make people work at an office for the sake of working at an office. But giving everyone the option to share a space together and collaborate still has value and I'd want to put that option back on the table.

We'll figure that out in time. But we really should, because I feel it'll be really important in the long term.