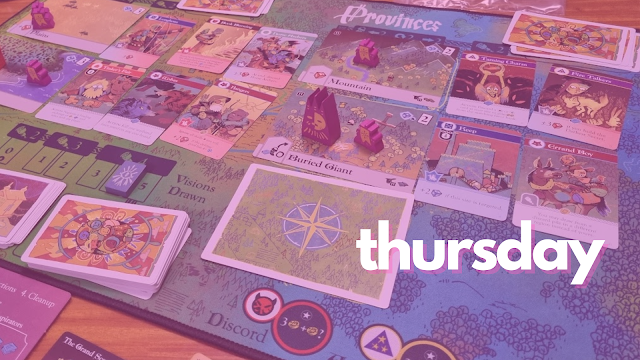 Today was a pretty busy work day. Lots of meetings with some interviews in-between. We had a very late lunch because I was stuck in back-to-back calls. But I wasn't necessarily tired at the end of the day - if anything I was feeling pretty fulfilled by the time our game night schedule rolled around. It was a good day.

Last night we managed to squeeze in our first attempt to play through Oath and it was...interesting. Like other Leder Games, it's not an easy game to learn quickly, but this first game was very instructive. There are a lot of rules we still need to clarify, especially with the quirkiness of the Clockwork Prince automata. But I'm still super happy that we have this game.

And while we master this game, we also need to learn other new ones like Ark Nova, which Tobie had surprisingly acquired right before our last game night with friends. It's a board game about building zoos, but closer to Dinosaur Island than New York Zoo. And it's sort of one of the big "it" games these days so I figured it would be something we'd enjoy getting for ourselves. I just didn't expect Tobie to find a secondhand copy so soon. We'll just have to find time to learn this game (and so many others) later on.

Final bit before ending this blog, I have to say that the middle of the week can be pretty overwhelming in terms of geek content. Today we watched the series finale of Obi-Wan Kenobi, and got new episodes for both Strange New Worlds and Ms. Marvel. So much content! It's just as well that Star Trek Online does maintenance at this time.