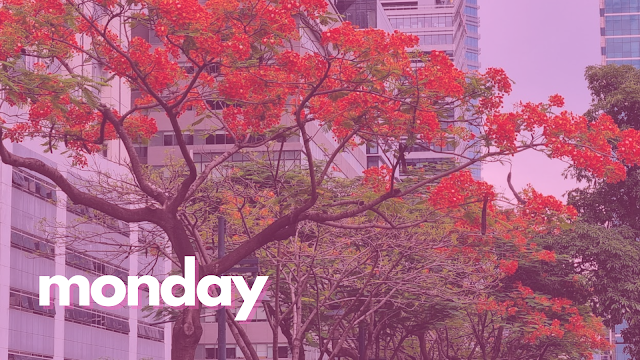 Today started out a lot better than how yesterday ended. Despite still not getting as much sleep as I had hoped to, I still woke up before 08:00am and made the most of the time by walking 5,000 steps first before going through my Monday morning yoga flow. Most days I just do yoga or some other exercise routine. It's rare that I get to add on more cardio or mix and match two workouts of any kind for a more fulfilling level of exertion. So being able to do two things, even if the first one was just pacing the Sietch like a crazy automaton, I'm still happy about it.

Work was pretty busy, but not to a crazily stressful degree. I got a lot done and yet I still had time to cook something for lunch. That's also a win.

In-between meetings, I also squeezed in time to start learning how to play Oath, another game from the same people who brought us Root. I'm pretty excited about figuring this out and getting us to play, but it's also a game that could benefit from a semi-regular group of players to play it with. It's not a full legacy game, but it does evolve and change over time because of how the game's end state influences the starting positions of the next game.

And it's not we don't have campaign-style games that are begging to be played with a group that can commit to playing it. Some of the more notable ones that we haven't been able to get started on include the likes of Detective: Vienna Connection, Dune: House Secrets, Pandemic Legacy: Season 0, Betrayal Legacy, and even Machi Koro Legacy. And we still have our unfinished campaigns for Seafall and Pandemic Legacy: Season 2. So many games!

But all these games require people to be sitting around a table in order to play them. And you typically need the exact same players to meet up to play in order to progress because you each control a specific character that is supposed to be going through this experience with the rest of the group. And while we have had a few game nights here and there, we've been careful not to mix and match people from different groups too often and I don't know who I'd want to invest a legacy game with. There are a few names that come to mind, but playing through any of these games is a serious commitment.

Tobie and I once played the legacy game Charterstone as a 2-player experience and we really enjoyed it, But I also immediately felt the loss of not having other players with us and I continue to wonder what a game of Charterstone would be like with a more full table of players.

And with news of a potential COVID-19 surge (even if the DOH doesn't want to call it that), it means a return to stricter levels of quarantine is possible and that's really going to make even just considering playing one of these campaign games next to impossible again. Only time will tell.