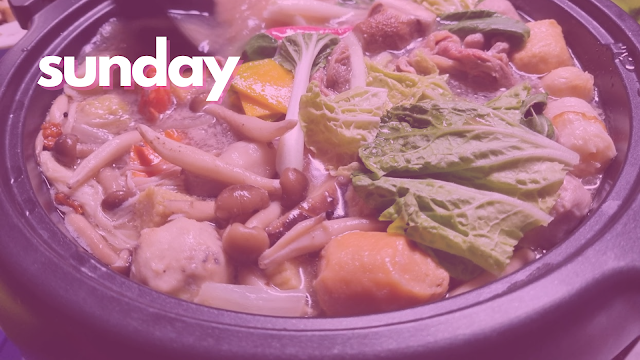 I guess we really pushed things quite hard in terms of the weekend because today felt a lot less efficient/productive, even by weekend standards. Let's recap a bit.

Last night we had hotpot game night - which means us sharing a massive hotpot meal before diving into our board games. As is the way of our FGTC game meet-ups, yesterday's event was also to celebrate a birthday and the hotpot was her idea for what we'd have as gaming fare. We brought our electric hotpot skillet, while she handled ingredients and it was a really nourishing way to celebrate her special day.

And then it was back-to-back board games for the group, including our first play-throughs for a number of titles including Isle of Cats: Explore & Draw and Abandon Planet. We kept playing until sunrise, just like we had for our Friday night game night and it was a lot of fun overall. But of course, it was also quite tiring given the circumstances.

I wanted to sleep in, but I still woke up before noon for whatever reason. I got some work done because we still have Father's Day content that had to go out today for clients. I managed to go back to sleep, but then slept in much longer than I had hoped. But the time I woke up past 3pm, it was almost time for our 4pm online TRPG session.

So we had to gamble with ordering out for lunch (despite the Father's Day spike in orders, no less) and got the game going. But naturally, I was feeling a bit frustrated with myself that I had lost the time I had earmarked for walking around BGC as exercise and other things. It couldn't be helped of course - my body demanded rest and it tried to collect on the sleep debt I had incurred over the last two days.

The actual game was still fun and our group of characters managed to survive our first real close brush with the supernatural forces we've been investigating. But our late lunch led to me not feeling up to cooking for dinner during the game and then I had no luck with delivery options since Father's Day was in full swing. So I ended up skipping dinner since Tobie had only eaten half of his portion of lunch. I wasn't feeling super hungry but by the time my intermittent fasting window closed, gave in and snacked on some keto trail mix that a friend had given so that I wouldn't go to bed without having eaten anything at all.

Another Monday looms ahead. And the cycle shall start anew. I still want to write blog posts for my other sites. I hope to find time to try out our new copies of Oath and (Tobie surprise!) Ark Nova. But it's also LGBT Pride weekend, so things are going to be VERY busy. Good luck to all of us.