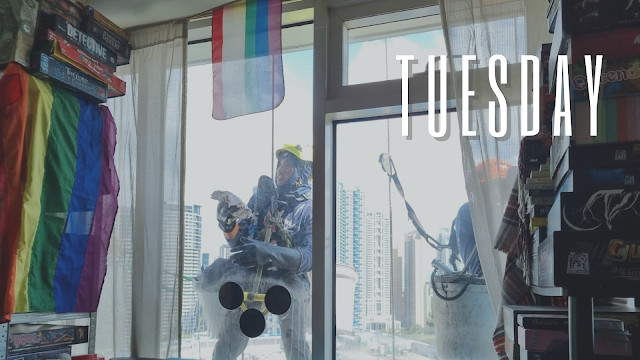 Metro Manila Community Quarantine - Day 696
Before you ask, the image above is a shot of the window cleaners who were outside our unit today. They weren't there long and I just wanted to capture the moment.
So tonight we finally finished watching Crash Landing On You, the wildly popular South Korean television series. It was quite an interesting ride and I can appreciate how this has become one of the most popular shows around the world. It had an interesting romance coupled with some high-stakes tension and a splash of great comic relief.
This marks our second big K-drama series after Hometown Cha-Cha-Cha - unless you want to count other shows like Squid Game or something. And it has become a new dinnertime habit for us even if that means we can only manage one episode per day. CLOY was worlds better than Cha Cha though, at least in my opinion. I guess it helps that I liked the leads in CLOY more than the other one.
The big question now is what show we'll explore next. Friends and family have a LOT of suggestions and it seems like there are a lot of good choices for us. The shortlist includes the likes of Coffee Prince, Mr. Queen, and Secret Garden, but feel free to chime in with your own recommendations, dear friends, and other readers.
We'll all find out which one we end up with by tomorrow.
QuaranGeeking sietch life television