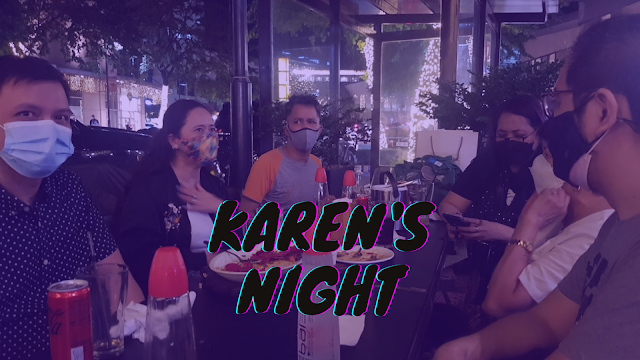 Metro Manila Community Quarantine - Day 622
It was our first time to go to Capitol Commons and one of our rare excursions outside the Sietch that didn't involve essential supply runs. It's always a bit of a risk to meet up with people, even with everyone being vaccinated, but gathering for Karen's birthday felt like an important enough reason to leave the safety of home.
It's kind of sad that for many of the limited times we've needed to risk gathering with family and other loved ones have involved deaths. Tobie and I have attended at least two wakes since the pandemic started, while there are others we never made it to. So it was nice to go out not necessarily because of a death, but to celebrate a life event - even for one we've already lost.
We were a relatively small group but still one of the biggest table gatherings we've attended. We had reserved an outside table which was strangely beside a bike rank, but thankfully it was far away from the Friday night crowds that had a lot less caution and paranoia than we do, I suppose. There was loud straight music blaring that made it even harder to have a conversation between masked individuals, but we did our best. The food was terribly late for who knows what reason and other quirks and complications.
But I have no regrets about tonight. I am happy that we got to celebrate Karen's birthday, even in this modest way. More than the food, it was about the company and the stories of the good times shared with her. There were tales of karaoke nights and silly "surprise" birthday cakes in the middle of game nights. There were little "revelations" of things that were known by most but not all. And there was a lot of effort put into holding back tears and focusing on the good times.
It's hard to be around those you love and not want to hug them. Initially, I know I tried to be prudent with quick touching of fingers to show empathy but minimize contact, then followed by alcohol and other hand sanitizers. But similar to how we felt during Rupert's wake recently, it's hard to remain distant from those most important in your life. But by end of the night, we were hugging everyone goodbye and it was definitely hard to let go.
Therein lies the risk, I suppose. That's how exposure can happen during a pandemic. But we're also only human and we've been doing our best to remain isolated and socially distant for so long. Things eventually give way. At least tonight involved people we trusted very much and I'd like to think our chances of exposure within the group were still pretty limited. But of course, one can't be too careful.
This has me thinking ahead to the big O Bar re-opening. We can talk a big talk about social distancing, strict controls on how many people can be at each table, and all that good stuff. But if tonight is any indicator, it's a whole different ball game once you're sharing a space together. You will inevitably want to be able to express how you feel about your friends in ways that go beyond just tapping your toes against one another or something. And while you might think it wouldn't be silly to compare the general crowd of folks at O Bar to our FGTC circle for friends, and that's generally true. But we also have O Bar friends who are very close to us and those are the ones we'll have to be most careful with.
But again, we're only human. And tonight was a lovely reminder of all the complexity that comes with being complex social creatures - as human beings are.
Happy Birthday, Karen! I hope you liked tonight's "surprises", even though you probably got to see them being prepared just how we could never hide the "surprise" birthday cakes from one another during a game night. Thank you for giving us a reason to be together again, just like how you'd always host all of us for FGTC game nights and let us raid your fridge, tinker with your coffeemaker, and play board games until the sun wouldn't come up. I miss our game nights, and as much as I miss playing with friends in person, I'm also not sure if my heart is not entirely ready to have a game night without you. But I'd like to think that is certainly not the case - you're always going to be with us whether we're gaming, singing karaoke, or just sharing a good meal together.
We love you. We miss you. We will all see one another again one day.
birthdays deaths gaming QuaranGeeking social networking tabletop gaming