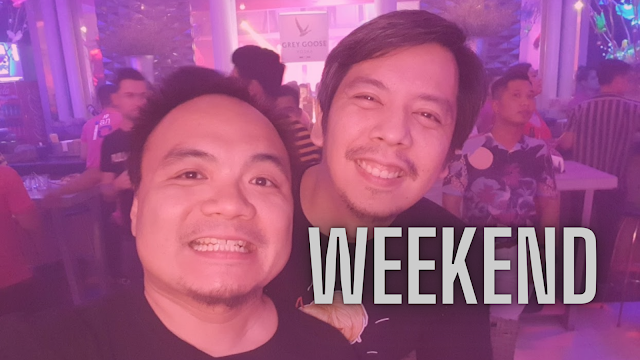 Metro Manila Community Quarantine - Day 609
The weekends always get me thinking about friends. As much as Tobie and I have continued to find ways to still have fun, I do miss our old pre-pandemic lives and all the fun we'd have with friends. Online game nights are fun, but it'll never beat gaming in person. Watching movies from the comfort of home is enjoyable, but some movies really deserve the big movie screen treatment. Watching online productions has resulted in some very creative ventures, but they never quite replace the power of watching live theater. And I'm really over the notion of drinking with friends online because that totally pales in comparison to actually being in one another's company. It just feels like sad drinking alone with an audience or something.
So let's go through what we've actually done during the weekend thus far.
We managed to watch Shang-Chi and the Legend of the Ten Rings and it turned out to be a lot better than I had expected. And it's not like I expected it to be a bad movie - but I also didn't expect it to be that great. It often felt more like a straight-up Chinese/Hong Kong fantasy movie, and I mean this in a very good way. This totally feels like a more legitimate representation for Asian Americans more than movies like Raya and the Last Dragon.
I had a very slow start to my day and totally wasn't feeling up to working out. I'm not sure if I was just lazy, tired from the week, sleepy because I had woken up too early a few times, or that my body was rebelling against the heavier weights I've been trying. But I still persisted despite wanting to quit in the middle of the first dumbbell circuit sequence. I got through to the end AND still managed some yoga, although my shoulders are really sore at the moment.
We caught the Black Canvas production of Wor(l)d Of My Bodies (WOMB) on Zoom while enjoying our weekly Sariwon lunch and it did make for an interesting creative effort. Wasn't our favorite such Zoom-based artistic performance, but it was something.
Our scheduled Night's Black Agents game got canceled since one of the players wasn't feeling well, but we managed to pivot to a one-shot of Lacuna instead, and MAN I had missed playing that game. Despite the fact that part of the character creation process is to roll to determine the names of our characters, I still ended up with Mason, which is the same name as my character from our previous long-running Lacuna campaign. I tried to play him as a different character entirely, but in end, we sort of treated this game as a prequel adventure in the Blue City, which totally worked.
We've wrapped up the day as a big movie night starting with the amazing latest James Bond movie No Time to Die, which really makes me want to re-watch all of the Daniel Craig Bond movies, and then maybe also just try to watch every single James Bond movie ever released and get around to reading the novels (which I've been collecting Kindle copies of). Such a good movie.
And we'll end the night with the much simpler Red Notice, because why not?
I still miss hanging out with friends and we'll get back to that in time. But this was mostly okay, too.
cultural victory gaming gym life health moving pictures QuaranGeeking sietch life tabletop gaming