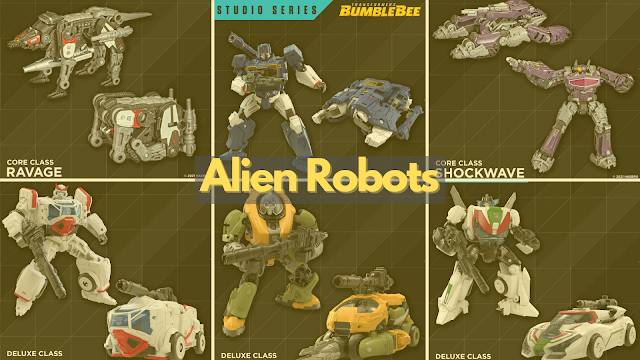 Metro Manila Community Quarantine - Day 606
Tuesdays are when Hasbro tends to make new Transformers announcements because "Transformers Tuesdays" sounds nice. A lot of times it's some repaint or retool of an existing figure just to come up with a new toy for some obscure character. That tends to get me scrambling out of bed to place a pre-order with one of the US sites just for me to save a spot, as it were. Then I end up canceling these orders later on when I find a local seller for the same figure.
This week they announced not just one or two figures but 6 new ones based on the 2018 Bumblebee movie as part of their Studio Series line - a collector line dedicated to depicting different Transformers based on their movie appearances. I've largely ignored this line since I've never been too keen on the "Bayformer" robot aesthetic of most of the live-action movies but I've recently given in when they started to include characters based on their appearance in the 1986 Transformers: The Movie animated feature.
Last night's reveals piqued my interest primarily because there's a new toy for Soundwave. As much as I focus largely on the other collector-oriented line Generations (and all of its sub-lines), soundwave figures tend to get me to cross into other toylines to get the toy. I've ignored the prior Studio Series releases that included the Bayverse incarnations of Soundwave as a car and a weird satellite thing. However, the Bumblebee movie was pretty awesome largely because of its G1-esque depiction of Cybertron at the beginning of the movie. And it seems they're going to milk that short sequence for what it's worth by creating toys for anyone even just glimpsed in that limited footage.
I've always liked the aesthetic of this version of Soundwave in his robot more since he inexplicable has his G1 cassette player sensibilities despite this being his Cybertronian form. This has resulted in him having a very unusual alternate mode that sorta looks like a tape player but of course will be described as some sort of flying...thing. I don't overly mind since he still looks cool enough, but this is generating a lot of buzz online.
This has me evaluating if I'll get the other figures in this line for one reason or another. I'm still not interested in the Earth-based characters from that movie, but these Cybertronian alternate modes are getting me rather excited. That Ratchet has a great vehicle mode and the Brawn has a nice look about him in his robot mode. But then I'm reminded that I had passed on the Cybertronian versions of Starscream and Thurst that had come out earlier in the year, so will me getting more of them force me to double-back and get them as well?
My completist tendencies do often result in me getting a few toys that I'm not 100% fans of but then I just want to complete the line. So I could just limit myself to Soundwave and Ravage and then call it a day. Or...I could go down the rabbit hole.
Such fun little non-problems to end up fussing over.
QuaranGeeking sietch life toys Transformers