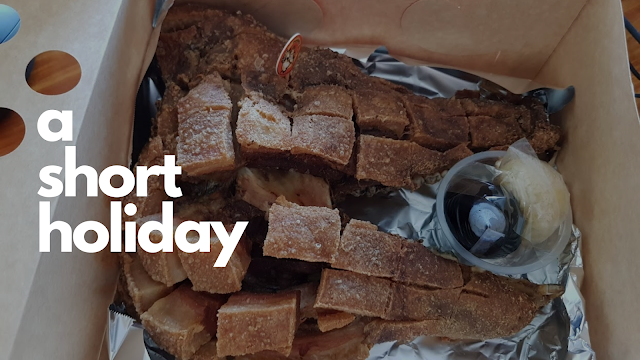 Metro Manila Community Quarantine - Day 600
Happy Diwali or Deepavali! We may not have a significant Indian population here, but it's still an official public holiday in Singapore, so we didn't have work today. Tobie had leaves to consume, so both got to sleep in a bit as a nice slow start to the day. I still woke up around my usual office hours out of habit and my efforts to stay in bed longer kept getting interrupted by deliveries that had decided to arrive separately this morning.
We were too lazy to cook today so Tobie ordered a Kapalmuks from Pepeton's Grill for lunch for which I just blanched some broccoli and cauliflower as accompanying roughage. Dinner was the leftover roast beef that Tobie had picked up at the weekend market at SM Aura along with some roughly cut lettuce as bases for salad.
Apart from watching Army of Thieves over lunch, we also sat down to figure out the MIND MGMT board game and played two rounds of the training mission for the "game". The experience was rather delightful as far as hidden movement games go that feels closer to Jaws and better thought-out design-wise than Treasure Island. Tobie speculates that we can probably force this as a board game that we can also play with friends remotely provided the Recruiter is always one of us since we have the actual cards and such. All other information between players is pretty much public, so that does make it easier to adapt to online play.
The best part about the game beyond its compelling gameplay is how they've crafted all these different secrets into the game. The game has a supporting website where we can key in any keywords we find over the course of playing the game and we've already unlocked a few bonus cards that we can print out and add to our game. I'm sure things are going to get even more exciting once we start opening up the Shift system boxes that are designed to add other rules and components based on our win record with the game. It's all so, so good.
I'll share updates here once we've had a chance to play a few rounds of the full game with the addition of some of the Shift boxes - at least once we get to that point.
There's still time for another game or two before bed, but we still have work tomorrow. It would have been nice to take Friday off as well, but there's still so much that needs to get done, so it's better to work instead of letting things pile up until Monday.
food adventures gaming holidays moving pictures QuaranGeeking sietch life tabletop gaming Tobie work