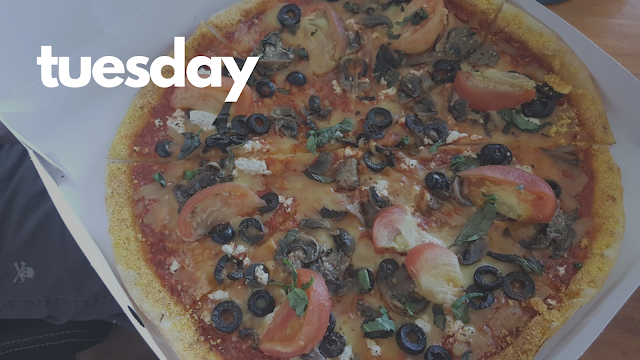 Metro Manila Community Quarantine - Day 598
Tobie had the liberty of sleeping in since he didn't officially have work today, but he ended needing to get up anyway because of a surprise Mary Grace delivery. It turned out to be an apology pizza and pasta because of a minor concern we had purchased from an independent seller. He had told them an apology was sufficient and that there was no need for other compensation, so receiving all this for a minor issue was certainly a rather magnanimous gesture. Talk about aggressive customer service, I guess.
My shift to keto means that pizzas are a very rare sight at the Sietch, and this one certainly looked pretty. I still didn't try it - the carbs weren't worth it after all, but it was oddly nice to see a big pizza again? Like the sight of it made me a little happier even if I didn't eat it - which sounds kind of silly as I type it out. But that's what I felt when I saw it. But Tobie did say I wasn't missing much, so that helped, too.
Work was very busy and I'm really looking forward to taking Thursday off. Tobie has also filed leave for the day, so at least we'll both be able to take things easy together. No major plans of going out or anything like that unless an errand comes up. It'll at least mean that we get to stay up a little later without worrying about waking up early the next day. That alone can feel like a gift.
Might be a different story when the cinemas re-open. Maybe we'd risk watching stuff on the big screen again if we can arrange for a decent viewing time with fewer people watching at the same time. I wouldn't be rather nice to go out again. Hopefully, things will continue to get "better" (or at least relatively safer) so that we can consider such options again.
Almost done with The Haunting of Hill House. I can genuinely appreciate this show since it doesn't use jump scares to convey the sense of dread. It still has some pretty intense moments and I know the ending is going to be quite the test for my resolve, but the quality of the family narrative is totally worth it. It's not very often that I find horror-related entertainment that I can watch, so this is a gift in itself. But it still scares me haha. Some things never change.
Welcome to November. The end of the year continues to inch closer. And we're still stuck at home.
food adventures holidays keto life moving pictures QuaranGeeking sietch life television Tobie work