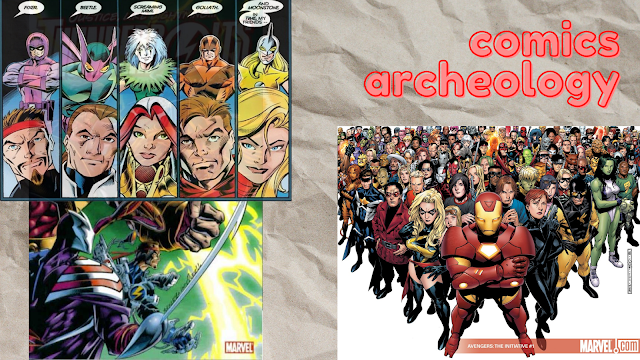 Metro Manila Community Quarantine - Day 579
I'm quite the sucker for many of the digital comic book sales on comiXology, and I've been doing my best to rein that in more and focus on books I already follow/like. But my digital collection is still filled with interesting titles that I really do mean to read at one point in time or another. So a lot of times I just go back as far as I can until my unread queue and look for things that I might want to venture into.
As of late, I've been going through two very different but similarly tangential titles. I first went through the entire run of The Avengers: The Initiative, which was one of the big post-Civil War books that explored how they were going to train new heroes after the whole superhero registration act. It's interesting to note how the book straddled many different "eras" in the Marvel Universe at the time starting with Civil War, crossing into Secret Invasion, knee-deep into Dark Reign, and culminating with some limited involvement in Siege. All that in one 35-issue series!
Now I've finally resumed reading the classic adventures of the original Thunderbolts team, which was one of those gimmicks launched around the time Heroes Reborn removed the Avengers and the Fantastic Four from the Marvel Universe. To have Baron Zemo and the Masters of Evil posing as a superhero team trying to fill in for the Avengers was a crazy idea that we all knew wouldn't last too long, but the resulting story was more engaging than I thought it would be. I love how many of the villains really start to truly get into being heroes, something aggravated by the addition of an actual young hero who becomes a part of the team. I'm two-thirds of the way through the entire run and I love the fact that they still have a story to tell beyond the inevitable reveal of them actually being escaped supervillain convicts.
I'm not sure where I'm going to go next with my reading. I still have the tangential effort to read the Morrison run of Doom Patrol that is taking a bit longer since that book is trippy. Most of my books are Marvel titles since they put stuff up for sale twice a week, hence the "problem" I have with my collection. Maybe I'll go through the different Marvel MAX books in my collection just to get those out of the way or invest time in some of the more classic manga titles that I've also collected while on sale. I started Astro Boy and man that book is really showing its age, which makes it a harder read. I have others like Neon Genesis Evangelion and even Cardcaptor Sakura, which I haven't even started, and others still like Alita: Battle Angel that I've started but still haven't finished because there are just so darn many of them.
This is why I've set my annual reading goal to be 365 titles a year. It's the only way to keep up with my digital comics collection and force myself to get my money's worth by making sure that I actually read all these books I've purchased.
Don't get me started on my Kindle collection.
books comics QuaranGeeking sietch life