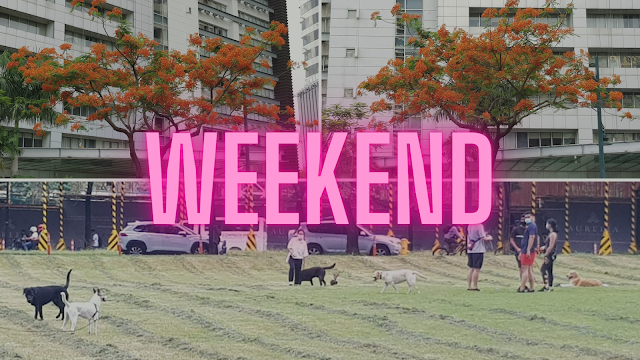 Metro Manila Community Quarantine - Day 561
Saturday was my scheduled monthly supply run for my parents. It is the bare minimum monthly excursion I make these days, at least since the first ECQ earlier this year. And every time I feel like I'm a survivor in some post-apocalyptic figure checking on what the outside world looks like now.
To be fair, BGC is not a terrible place to me. And with this latest GCQ (Alert Level 4) status, this weekend felt a bit more "normal"-like with more people on the street and different restaurants offering limited dine-in options again, albeit with a slant to favor fully vaccinated people. And since this is still BGC, we had a bunch of folks trying to take selfies on the street because this is totally a BGC thing that people do. I appreciate that most did not appear to be taking off their masks for these group photos.
A good friend is actually in Boracay today. Part of me kind of misses traveling, including the quirks of flying. But Tobie and I remain very careful about stepping out and we haven't even considered the possibility of a staycation anywhere. It just doesn't feel safe enough to be away from home for lengthier periods of time given how the Delta variant continues to jump from person to person (including vaccinated people!)
The weekend has been nice. We played Pendragon yesterday. We ended up doing a one-shot of Brindlewood Bay today instead of our scheduled Ryuutama game since technical issues made it difficult for one of our players to join.  And in-between I've spent an unhealthy amount of time on Oxygen Not Included as I try to figure out how to stabilize my base and progress to the next phase of the game beyond bare minimum survival.
My back is being weird again, but again the nature of the pain seems slightly different from the other two instances of exercise-related muscle strain. Now it hurts more when I twist in certain ways or raise my legs when lying down. But it doesn't hurt during certain static stretches that I do for lower back support and flexibility, so I'm a little confused. But it's still in the same general area of my back, which tells me that I'll really need to be careful in how I manage things. The area seems prone to stress-related injury - I should probably get it checked out some time. Not now, of course, it isn't a serious enough injury to merit risking going to high-risk areas like doctor's clinics and hospitals.
gaming health QuaranGeeking run the world sietch life tabletop gaming