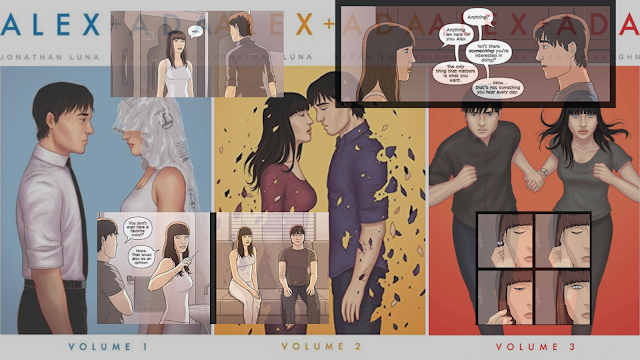 I really dig through my many comiXology purchases to figure out what exactly I had purchased. I was very trigger-happy with a lot of the sales over the years and I've collected quite a number of different issues and compilations including titles I've loved for years like Spider-Man or intriguing comics that I want to try eventually - a good example of this is Descender followed by Ascender, which I still super love.

And it's super easy to get lost in the big Marvel vs DC sort of argument, so I've also invested a fair amount into Image Comics because they have built up quite a portfolio of interesting stories. Alex + Ada turned out to be one of those sorts of comics that had a rather interesting story to tell within 15 issues.

The main premise is that Alex receives an android as a gift from his grandmother in a near-future that is still getting over a wild robot incident that led to them passing laws banning fully sentient artificial intelligence. There's an obvious attraction since the robot, which he eventually names Ada, is designed to be attractive (and is fully functional), but he's also aware that she's still just a robot and probably not something you'd want to fall in love with.

What he actually decides to do is rather surprising and it's what defines the whole comic. There are obvious parallels that the discussion on robot rights have with similar struggles of many marginalized communities and how they've been treated. And things go a bit deeper into how we define relationships, how we think about identity and all that fun stuff.

It's not the greatest story that I've ever read, but it's certainly a powerful piece and I'm happy that I have it in my digital comic book collection. And while I still love classic Marvel and DC superhero stories, there are so many other comics released by other publishers that live outside the superhero narrative and use the comic book medium to tell some pretty striking stories.