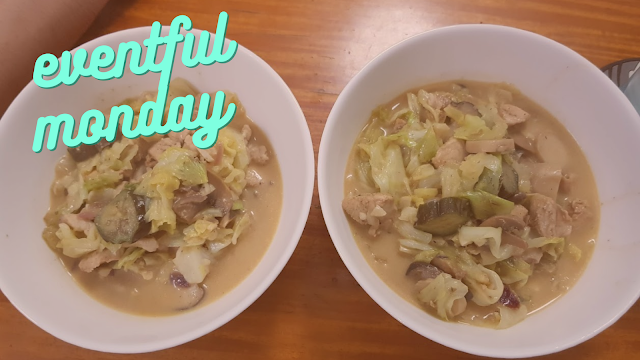 Metro Manila Community Quarantine - Day 520
First, whoa Afghanistan. So it seems the Taliban has largely taken over the country again - or at least its major cities. Different analysts had projected that this was bound to happen once the US formally pulled out its forces. But every media outlet has stressed that no one really expected things to move as quickly as they had. Instead of a few more weeks or months of Afghanistan's democratic government, they were limited to just a few days. And the new reports covering the pullout of remaining US assets include a lot of people swarming the airport, hoping to somehow get a seat to escape the regime change. It's quite traumatic to even watch from the safety of another country. I can barely imagine how bad things are for them.
On to less world-changing news.
Today I was scrambling for ideas of what to cook for dinner after a long Monday shift and for some reason my mind drifted to the coconut milk that Tobie had gotten for our occasional hot chocolate efforts (as it's a keto alternative to regular dairy). When I think of coconut milk in a meal, I inevitably think of how it works with cabbage and then I just made sure there were chicken breasts in the fridge to act as a protein base. And then I added a sliced-up eggplant to complete my usual mix of things that I like with coconut milk. It made for a nice dinner even if I have no idea what to call this sort of a dish.
As precise as I can be about a lot of things, over the years I have come to embrace going with my gut more when it comes to cooking meals. I've become rather comfortable with innovating based on limited ingredients or chasing a flavor in my head as I assembled a dish real-time. I have general fundamentals that I follow like how the way I generally make most my pasta sauces with variations on the protein and other flavor enhancements or how I approach soups. Those present a good place to start and somehow my imagination makes up for the rest of the recipe.
And as much as it will always be a lot more convenient to order out and let someone else worry about cooking, there is something rather satisfying with a dish comes together. And I'm just glad that Tobie appreciates the different things I experiment with. Not all dishes are equally delightful, but at least they remain edible. Not much good bar of standards but it's somewhere to start.
cooking sietch life stop the presses